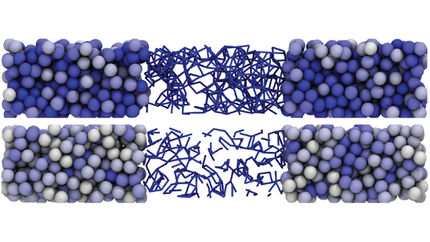 For the first time, researchers have been able capture images providing unprecedented details of how particles behave in a liquid suspension when the phenomenon known as shear thickening takes place. The work allows us to directly understand the processes behind shear thickening, which had previously only been understood based on inference and computational modeling. These renderings of microscopic images obtained from the confocal rheometer, showing the intricate network architectures formed by smooth (top) and rough (bottom) particles in strongly shear thickening suspensions. The clustered particles have been cut away from the center of each image and replaced with blue lines that illustrate the nature of the networks formed between particles.

For the first time, researchers have been able capture images providing unprecedented details of how particles behave in a liquid suspension when the phenomenon known as shear thickening takes place. The work allows us to directly understand the processes behind shear thickening, which had previously only been understood based on inference and computational modeling.

Shear thickening is a phenomenon that can occur when particles are suspended in a low-viscosity solution. If the concentration of particles is high enough, then when stress is applied to the solution it becomes very viscous – effectively behaving like a solid. When the stress is removed or dissipates, the suspension returns to its normal fluid-like viscosity. This phenomenon can be seen in popular YouTube videos in which people are able to run across a solution of corn starch suspended in water – but sink into the solution when they stand still.

Shear thickening can be a liability or an advantage, depending on the context.

For example, in industries from food processing to pharmaceutical manufacturing, companies often try to pump liquids with high particle concentrations to make manufacturing processes more efficient and cost-effective. And if those companies don’t properly account for shear thickening, the liquids being pumped can jam or clog – costing them valuable time and potentially damaging their equipment.

On the other hand, the properties of shear thickening can also be used to develop force-absorbing materials for use in applications such as body armor, or as a mechanism for controlling the physical characteristics of soft robotics devices.

A team of researchers at North Carolina State University and Northeastern University used a customized instrument, called a confocal rheometer, to capture microscopic images of particles in solution as they were exposed to stress in order to trigger shear thickening. Computer simulations were used to support the experimental observations.

“As the stress increased, we were able to see complex networks form between particles,” says Lilian Hsiao, corresponding author of a paper on the work and an assistant professor of chemical and biomolecular engineering at NC State. “And the shapes of these networks were dependent on the shape and roughness of the particles. Specifically, the way neighboring particles are rearranged when stress is applied dictates the way they shear thicken.

“For practical applications, people won’t need to capture their own microscopy images of what’s happening during the shear thickening process,” Hsiao says. “If they know the roughness of the particles they have in solution, they will be able to determine what concentrations will work for their various applications.”