Listening in on laundry germs as they grow 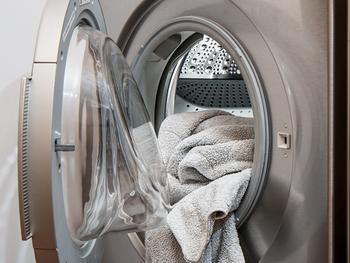 Germans wash more than 5 kg of laundry per week. What many people don‘t realize is that even freshly washed laundry still contains significant amounts of microorganisms such as bacteria and fungi. A group of researchers led by Prof. Dr. Markus Egert at Furtwangen University (HFU) has been investigating germs in washing machines and on laundry for some time. The German Federal Ministry of Education and Research has now chosen this work as "Project of the Month". The team recently published the first metatranscriptome study for washed laundry.

Current trends such as washing laundry at low temperatures to save time, water-saving programs and the use of bleach-free liquid detergents favor germ growth in washing machines and on laundry. Even though laundry germs probably do not pose a particular health risk to healthy people, they can become unpleasant and, for example, produce bad odors. "You mainly find water bacteria from the washing machine on washed laundry, but also insufficiently inactivated skin and environmental germs that originate from dirty laundry. This is also now well known from studies conducted by our research group," explains study leader Egert, who teaches microbiology and hygiene at HFU. "A mystery, however, is still what these germs are up to on the laundry, for example, what they eat and what metabolic products they produce."

So-called metatranscriptome analyses are an attractive way to find out what metabolic processes are going on in a complex microbial community. To do this, messenger RNA (mRNA) is extracted from samples and sequenced. Most mRNAs contain information for enzymes, proteins that drive and regulate metabolism. Such analyses are already well established for communities with many active microorganisms, such as the human digestive tract.

"For washed laundry, no one has yet trialed this technology. The challenge lies in the instability of mRNA and the relatively small amounts found on washed linen. We chose mild washing conditions and then 'forgot' the damp textiles in the machine for 72 hours. In the end, this allowed us to harvest enough mRNA for this pilot study," Egert explains.

In the study, textile samples of cotton and polyester were washed twice independently together with worn laundry in a used household washing machine at 30°C with liquid detergent. Differences in bacterial gene expression on the different fabric types were then looked for.

Egert explains, "The main goal of our pilot study was to establish metatranscriptome technology for laundry hygiene. We succeeded in doing this well. In addition, we were able to show the first differences in bacterial gene expression between cotton and polyester fabrics."

In total 17 genes were identified that differed significantly in their expression between cotton and polyester. Among them were two that were assigned to the genus Moraxella, which includes the well-known 'stinker bacterium' Moraxella osloensis. Some of the identified genes are related to bacterial carbohydrate metabolism. This suggests that the moist textiles themselves may serve as food for the bacteria. Cotton consists of cellulose, which in turn is made up of glucose, or sugar, units. Polyester, on the other hand, is a plastic that is difficult to degrade.

"We now want to use the new technology for larger follow-up studies to learn even more about what the germs are up to on the laundry and how their behavior can be optimized from a hygienic point of view. You don't have to kill them to do this. Just 'persuading' them to stop stinking would be a great success," summarizes Egert.