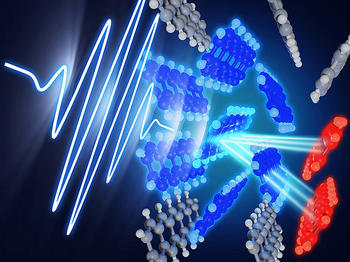 In the singlet exciton fission process, a singlet exciton (blue) is created upon absorbing light and then splits into two triplets (red) on ultrafast timescales. The team tracked real-time molecular motions acompanying this process in pentacene.

The efficiency of solar cells can be significantly increased with a certain physical effect. A research team has now observed in detail for the first time how molecular movements influence this effect.

Researchers from the Fritz Haber Institute (FHI) in Berlin, the Max Planck Institute for the Structure and Dynamics of Matter (MPSD) in Hamburg and the Julius-Maximilians-Universität Würzburg have provided important new insights into a key process for the development of more efficient solar cells and other light-based technologies, called singlet exciton fission. They have managed to track how molecules of a promising material, single crystals comprised of pentacene molecules, move in real time as singlet fission takes place, showing that a collective motion of molecules may be the origin of the fast timescales connected to this process.

Energy generation in light-based technologies relies on the ability of materials to convert light into electrical power and vice-versa. Certain organic molecular solids have the peculiar ability to significantly increase the solar to electrical power conversion efficiency, thanks to a process called singlet exciton fission (SEF). In this process two electron hole pairs, which are called excitons, are generated by the absorption of one light quantum (a photon). Because of the pronounced technological implications, it is no wonder that tremendous research efforts have been dedicated to understand how SEF really works.

The efficiency and speed of the SEF process are related to the way molecules arrange themselves in the material. Despite hundreds of studies on the topic, however, there had been no way to observe in real time how exactly the molecules move in order to facilitate the SEF event. Understanding this bit of the puzzle is essential to optimize SEF materials and further increase their efficiency.

Snapshots of the atomic structure

In a study published in Sciences Advances today, researchers from the FHI, the MPSD and the chair of Experimental Physics VI at Julius-Maximilians-Universität Würzburg have managed to track how molecules in a crystalline material build from pentacene molecules move during the SEF process, using an experimental technique called “femtosecond electron diffraction”. Such a technique can capture snapshots of the atomic structure in real-time as the SEF process unfolds. In order to be able to capture these snapshots in pentacene, a material which only contains small and light atoms, the measurements had to reach an exceptional stability and resolution.

“We have brought such experiments to a point where they can treat these materials, which is very exciting for chemistry, biology and materials science. These measurements have revealed that truly collective molecular motions accompany the SEF process in pentacene. Specifically, an ultrafast delocalized oscillation of pentacene molecules has been identified, which facilitates efficient energy and charge transfer across large distances”, says Heinrich Schwoerer from MPSD.

Molecules sliding with Respect to each other

These collective atomic motions observed by the team involved in the project may well be the key to explain how the two excitons generated from the SEF process can separate, which is a prerequisite to harvest their charges in a solar energy device. “Simply put, our picture is that these molecular motions efficiently neutralize the forces that keep the two excitons together right after they have been generated, providing a possible explanation about the origin of the ultrafast timescales related to the fission, and thereby facilitate the high efficiency of solar to electrical energy conversion”, says Hélène Seiler, a postdoctoral fellow at the FHI in the group of Ralph Ernstorfer.

"Beyond providing important insights into the SEF process, this work shows that it is possible to reveal the atomic motion in more complex, functional organic materials, which are delicate and composed of light atoms" says Sebastian Hammer from the University of Würzburg.