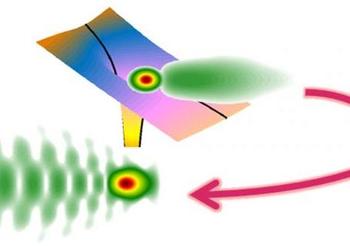 Hologram generated by the multi-orbit contribution from strong-field tunneling ionization.

The relationship between ionization time and the final momentum of the tunneling photoelectron has been theoretically established in terms of a "quantum orbit" model and the accuracy of the relationship has been verified experimentally. But which quantum orbits contribute to the photoelectron yield in strong-field tunneling ionization has remained a mystery, as well as how different orbits correspond differently to momentum and ionization times. So, identifying the quantum orbits is vital to the study of ultrafast dynamic processes using tunneling ionization.

A collaborative team effort led by HUST graduate students Jia Tan, under the supervision of Professor Yueming Zhou, along with Shengliang Xu and Xu Han, under the supervision of Professor Qingbin Zhang, the study indicates that the hologram generated by the multi-orbit contribution from the photoelectronic spectrum can provide valuable information regarding the phase of the tunneled electron. Its wave packet encodes rich information about atomic and molecular electron dynamics. According to Peixiang Lu, HUST professor, vice director of the Wuhan National Laboratory for Optoelectronics, and senior author of the study, "Attosecond temporal and subangstrom spatial resolution measurement of electron dynamics is made possible by this new scheme for resolving and weighing quantum orbits."