Electromagnetic Fields of Nanostructures Visualized in 3D for the First Time 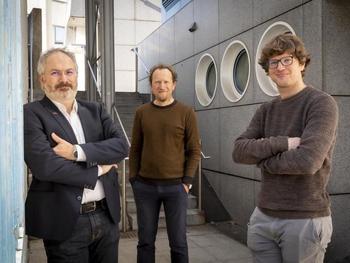 Researchers at Graz University of Technology (TU Graz) and the University of Graz, together with experts from France, have succeeded in imaging so-called surface phonons in three dimensions for the first time. The research success could accelerate the development of new, efficient nanotechnologies.

Whether for microscopy, data storage or sensor technology, many advanced technological applications that require specific functions rely on the structure of the electromagnetic field near the surfaces of materials. In nanosystems, so-called surface phonons, i.e. temporal distortions of the atomic lattice, contribute decisively to the physical and thermodynamic properties.

If surface phonons could be specifically manipulated, it would be possible to achieve better thermal conduction or heat transfer between two components with nanosurfaces. This could be used, for example, in detectors, sensors or in highly efficient passive cooling systems. In addition, surface phonons concentrate electromagnetic energy spectrally into the far infra-red range. This paves the way for super-resolution lenses, improved vibrational spectroscopy or other fascinating applications.

Electromagnetic fields in the vicinity of nanostructures

Despite its enormous potential, this area of solid-state physics is still poorly explored. For the development of new nanotechnologies, these fields must first be made visible on the nanometre scale. "Visualizing these local fields is the starting point for a deeper understanding of the fundamentals and for better design of nanostructures," attests Gerald Kothleitner, head of the Institute of Electron Microscopy and Nanoanalysis at TU Graz. "Electron microscopes powerful enough to even register the relatively low energy of phonons were only developed a few years ago. To date, however, they could only be measured inadequately, at best in two dimensions."

Together with the French Laboratoire de Physique des Solides (LPS) Orsay, Gerald Kothleitner, his institute colleague Georg Haberfehlner and Ulrich Hohenester from the Institute of Physics at the University of Graz have now succeeded for the first time in imaging surface phonons in three dimensions. The results have been published in the Science journal (https://science.sciencemag.org/content/371/6536/1364/tab-article-info). Kothleitner, corresponding author of the study: "We excited these lattice vibrations with an electron beam, measured them with special spectroscopic methods, and then reconstructed them tomographically. As a result, the infra-red light fields generated by the surface phonons of a magnesium oxide nanocube became visible in three dimensions for the first time, and the spatial distribution was discernible. In particular, this also allowed us to image the sites with high field enhancements and the resulting strong interactions of certain phonons with the environment."

The development of the methodology and the implementation of the novel tomographic reconstruction were carried out under the leadership of the University of Graz. Ulrich Hohenester draws parallels between the familiar X-ray image and the computer tomography process: "A 3D reconstruction of the object can be created from many composite 2D projections." Instead of the X-ray beam, the physicists used an electron beam, which interacts with infra-red light fields instead of bones and tissue. “As on a violin or guitar," Hohenester explains, "the vibrations on the surface of the nanocube are broken down into a series of resonances. These modes are then chosen to obtain the best possible agreement with the experimental data."

The first comprehensive evaluation and 3D representation of electromagnetic fields is a success that can be attributed to the close cooperation of TU Graz and the University of Graz in the framework of "NAWI Graz". A latest-generation scanning transmission electron microscope (STEM) was used to measure these radiation-matter interactions at the nanometre scale. There are only a handful of such microscopes in the world that allow this and one of them is in Orsay. The concept of 3D imaging of phonons was developed by Gerald Kothleitner in collaboration with Orsay during project planning for a pan-European project called ESTEEM 3: a project in which, among other things, new electron microscopy techniques are being developed. In the field of applied electron energy loss spectroscopy and electron tomography, the researchers at TU Graz are among the world's leading working groups.