Three-dimensional View of Catalysts in Action 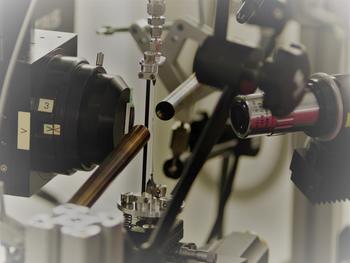 Operando X-ray spectroscopy shows what happens in each single part of a working catalyst.

For understanding the structure and function of catalysts in action, researchers of Karlsruhe Institute of Technology (KIT), in cooperation with colleagues from the Swiss Light Source SLS of Paul Scherrer Institute (PSI) in Switzerland and the European Synchrotron Radiation Facility (ESRF) in France, have developed a new diagnostic tool. Operando X-ray spec-troscopy visualizes the structure and gradients of complex technical catalysts in three dimensions, thus allowing us to look into functioning chemical reactors.

Catalysis is indispensable for many branches. 95% of all chemicals are produced using catalysts. Catalysts also play a key role in energy technologies and environmental protection. Catalysts are materials used to accelerate chemical reactions in order to reduce energy consumption and undesired by-products. This chemico-physical principle is the basis of entire systems, examples being catalytic converters in cars or catalysts in power plants to remove pollutants from their exhausts. Technical and industrial catalysts are also applied in fertilizer and polymer production. Often, they must exhibit high pressure resistance and mechanical strength, while additionally operating under dynamic environmental condi-tions. Even smallest efficiency increases in the removal of pollu-tants, such as carbon monoxide, nitrogen oxides, and fine dust, from exhaust gases or in the production of green hydrogen will result in major advantages for humans and the environment. To improve existing catalytic materials and processes, however, exact understanding of their function is required. “Whether in a large chemical reactor, in a battery, or underneath your car – technical and industrial catalysts often have a highly complex structure,” says Dr. Thomas Sheppard from the Institute for Chemical Tech-nology and Polymer Chemistry (ITCP) of KIT. “To really under-stand how these materials function, we need to take a look inside the reactor when the catalyst is working, ideally with an analytical tool to detect the complex 3D structure of the active catalyst.”

Thomas Sheppard directed a study on automotive catalytic con-verters, the results of which are now reported in Nature Catalysis by the researchers involved from KIT, PSI, and ESRF. For their studies, the team used a newly developed setup and carried out tomography experiments at synchrotron radiation facilities in Swit-zerland and France. Computer tomography produces 3D images of a sample, including the exterior and interior, without needing to cut it open. By using a special reactor, the researchers performed to-mography and X-ray spectroscopy to track an active catalytic pro-cess. In this way, they succeeded in observing the 3D structure of an emission control catalyst under conditions just like those in a real automotive exhaust. This so-called operando X-ray spectros-copy provides not only the 3D structure of the sample, but also important chemical information.

“Since catalysts often have a rather complex and non-uniform structure, it is important to know whether the entire catalyst volume or only parts of it are performing their chemical function as intend-ed,” explains Johannes Becher from ITCP, one of the main authors of the study. “Operando X-ray spectroscopy lets us see the specif-ic structure and function of every single piece. This tells us wheth-er the catalyst is performing at maximum efficiency or not and, more importantly, it helps us understand the underlying process-es.” During reaction, the team observed a structural gradient of the active copper species within the catalyst, which could not be de-tected previously using conventional analytical tools. This is im-portant diagnostic information in the performance of emission con-trol catalysts. The method itself can be applied to many different catalysts and chemical processes.

The team’s studies show how visualizing the chemical state of an active catalyst in 3D can bring new opportunities for materials and reaction diagnostics. “Until now, it was not possible to freely select any piece of a working catalyst and understand which reactions take place in there without disturbing it. Now, we can follow exactly which reactions are occurring, where, and why,” says Professor Jan-Dierk Grunwaldt from ITCP. “This is the key to improving our understanding of chemical processes and designing better and more efficient catalysts in future.” Studies using operando X-ray spectroscopy can be carried out at different synchrotron radiation sources, provided that an appropriate sample environment exists. The groups of Jan-Dierk Grunwaldt and Thomas Sheppard will continue their investigations as part of the new Collaborative Re-search Center “TrackAct” at KIT. “TrackAct” is aimed at under-standing and improving the design and efficiency of emission con-trol catalysts.