Evolution in real-time: How bacteria adapt to their hosts 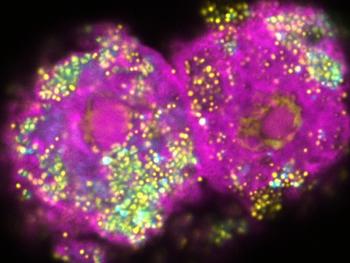 Parachlamydia are widespread in the environment where they live in amoebae. The bacteria serve as a model system for studying the evolution of infectivity. The image shows two amoeba cells in pink that are infected with Parachlamydia (yellow/blue).

Bacteria that invade animal cells in order to multiply are widespread in nature. Some of these are  pathogens of humans and animals. In the environment, they are often found inside unicellular organisms. A research team led by Matthias Horn at the Centre for Microbiology and Environmental Systems Science at the University of Vienna has made use of  laboratory experiments to gain a better understanding of how these bacteria adapt to their host cell over time and become increasingly infectious under certain conditions. This is due to changes in the genome and in gene expression, particularly in genes that control the interaction of the bacteria with their hosts and those responsible for bacterial metabolism.

In the laboratory of the Center for Microbiology and Environmental Systems Science at the University of Vienna, so-called "Parachlamydia“ was observed after a period of 14 months of evolution inside its unicellular host. Parachlamydia is a genus of environmental chlamydiae that is found in water or soil. In contrast to their human-pathogenic relatives, they are not infectious for humans. They live in unicellular organisms and are dependent on nutrients from their hosts. Therefore, over the course of time they have perfected mechanisms to invade host cells and reproduce inside them.

Theoretical predictions confirmed in the laboratory

Parachlamydia serves as a model system to study the adaptation of host-dependent bacteria in the laboratory. The evolutionary experiment carried out for this purpose involved over 500 generations of bacteria, which corresponds to a period of about 15,000 years in human time-frame.

To verify theoretical predictions on the development of infectivity, the bacteria were kept in the laboratory under two different experimental conditions. In one part of the experiment, the bacteria were dependent on frequent infection of new host cells in order to survive. In the other part, they were able to multiply permanently within one and the same host cell. “Our results reveal that if the bacteria are able to remain within one host cell and ensure that they continue to live in the daughter cells of the host when the host cell divides, their infectivity does not change. However, bacteria become increasingly infectious when they have to move from one host cell to another host cell in order to survive.” explains Paul Herrera, first author of the study.

Adaptation of the bacteria at the molecular level

The researchers went one step further in their experiments. They examined the genes of the bacteria at the beginning of the evolutionary process and compared them with the genes after 500 generations of evolution. They found that the genes of the two groups of bacteria differed significantly at 1,161 sites.

However, this genetic information alone was not sufficient to explain the differences in infectivity. Only the subsequent analysis of gene expression - i.e. the use of the almost 2,500 genes during infection - revealed that the infectious bacteria, which have to switch between host cells, showed changes in the expression of genes crucial for the infection mechanism and for certain metabolic pathways that are important for survival outside the host cells.

The transmission pathway plays a crucial role in the development of infectivity in host-dependent bacteria. The observed increase in infectivity is based on a variety of genetic differences and major changes in gene expression. These modifications result in the  host cells becoming more easily infected and give the  bacteria a better chance to survive outside the host cell," summarises Matthias Horn.