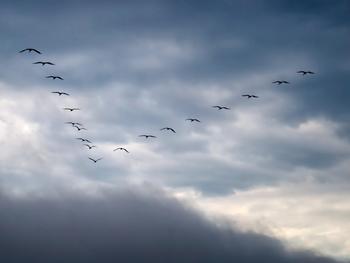 An international consortium succeeded in tracking the genesis and spread of new reassortants of avian influenza viruses by the use of mathematical analyses. This large-scale international study has now been published in the scientific journal PNAS (Proceedings of the National Academy of Sciences of the United States of America). The work was jointly carried out by the Friedrich-Loeffler-Institut (FLI), the Erasmus University Medical Center and the University of Edinburgh within the “Global Consortium for H5N8 and Related Influenza Viruses”.

The team analysed a large number of genome sequences from virus samples that had been collected all over the world during the largest avian influenza epidemic to date in 2016/2017. In doing so, the scientists described numerous virus variants that were originated by the exchange of individual segments of the virus genome. They used mathematical methods allowing them to estimate when and where the virus had exchanged genetic material with other viruses circulating in wild or domestic birds. The scientists were thus able to make statements about the group of birds in which the new variants occurred and used the genome sequences to track the spread of virus strains from infected domestic poultry in Asia by migratory birds up to Europe.

The study is based on complete genome sequences that members of the consortium have shared in public databases. “The identification of the genome sequences of viruses has become more and more important during the last years.” explained Prof. Martin Beer, Head of the Institute of Diagnostic Virology at the FLI, which has substantially contributed to the study. “The use of most modern sequencing methods and innovative analysis tools allow us not only to track the genesis of new virus strains, but also to understand their spreading and to make first statements on their risk potential.” The 2016/2017 outbreak of highly pathogenic avian influenza was the largest HPAI epidemic ever and led to high mortalities in the wild bird population and serious economic losses in the poultry industry. This study provided important insights to improve the monitoring of potential entry routes for new viruses and thus serves to protect domestic and wild bird populations.

The study emphasises the importance of international collaboration in case of virus outbreaks. It is already the second study of this type (1st study: „Role for migratory wild birds in the global spread of avian influenza H5N8”) presented by this consortium that brings together more than 30 scientists from all over the world.