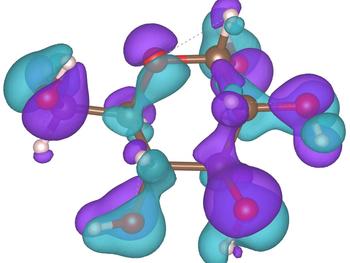 A sandwich of molybdenum, sulfur and selenium turns out to be deliciously useful for detecting biomolecules.

Tests at Rice University's Brown School of Engineering of a two-dimensional Janus compound showed it could be an effective and universal platform for improving the detection of biomolecules via surface-enhanced Raman spectroscopy (SERS).

SERS is an established technique that enables the detection and identification of small concentrations of molecules -- or even single molecules -- that get close to or adsorbed by metallic surfaces, including nanoparticles. It's often used to detect nanoscale proteins in bodily fluids, helping to detect diseases and determine treatments, and in environmental analysis.

But metallic SERS media often prompt side reactions that create background noise. Janus MoSSe synthesized at Rice is nonmetallic. "This work mainly addresses whether we can enhance the target molecules' signal strength," said materials scientist and principal investigator Jun Lou. "We wanted to know if we could make it stand out from the background noise."

The answer was clearly yes, as Lou and his team reported in Nanoscale.

MoSSe introduced by the Lou lab in 2017 was produced by chemical vapor deposition. Molybdenum sits in the middle with a layer of sulfur on one side and another of selenium on the other; hence the two-faced Janus characterization.

The different electronegativities of each layer make it a SERS superstar, said lead author and Rice alumnus Shuai Jia, a former graduate student in Lou's lab.

"The dipole created between the top sulfur and the bottom selenium lands out-of-plane, and this creates an electrical field a few nanometers beyond the MoSSe," Jia said. That field interacts with molecules that come close, enhancing their vibrational intensity enough to be detected.

The researchers noted tests with MoSSe also detected molecules of the neurotransmitter dopamine and that the substrate should be adaptable to sense other molecules.

Lou said there's room for improvement. "We're looking at hybrids of MoSSe with some metallic nanoparticles, and also trying to enhance the dipole strength," he said.