Microflora of glasses: the mini universe on your nose 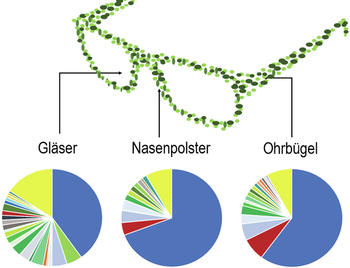 On the lenses, temples and nose pads in total, 5232 different species of bacteria and 665 genera were discovered

Almost every second European wears glasses. Due to their central position on our face, close to our mouth and nose, and to their regular contact with skin, particularly our hands, glasses have been proven to be frequently contaminated with microorganisms. Furtwangen University has now published the first molecular biological study worldwide on the bacterial colonisation of glasses which have been worn.

„Because many bacteria could not, until now, be cultivated, molecular biological techniques allow completely new insights into the colonisation of everyday objects such as glasses,“ explains Principle Investigator, Prof. Dr. Markus Egert, who lectures on microbiology and hygiene at Furtwangen University on the Schwenningen Campus. The challenge presented by this study also lay in the extremely small amount of DNA which can be isolated from glasses.

In the study, 30 pairs of glasses belonging to wearers in the university were each analysed in three places: the lenses, temples and nose pads. In total, 5232 different species of bacteria and 665 genera were discovered. The greatest variety of species was found on the lenses, the least on the nose pads. Generally the most frequently detected were skin and mucous membrane bacteria such as cutibacteria, corynebacteria and staphylococci, which are transferred to the glasses over the skin of the face, the hands, or the mouth and nose – by breathing, or by breathing on the glasses to clean them. Also found on the lenses were typical environmental microbes such as pseudomonads. More than 80% of the 13 most often identified genera are potential pathogens which can cause infections, including eye infections, in those with weak immune systems.

The study provides a comprehensive basis for a more accurate assessment of glasses as a germ carrier, especially in the healthcare sector. Follow-up studies will show to what extent glasses can act as a reservoir for bacteria in recurring eye infections and the transmission of antibiotic-resistent bacteria. It also underlines the necessity for appropriate hygiene measures for those, such as ophthalmologists and opticians, who through their work, have a great deal of contact with glasses wearers.

In a previous study by Egert’s working group, it was shown that bacterial load on glasses could be reduced by approximately 95% by means of moist cleaning, such as by using a pre-moistened lens-cleaning wipe for glasses. „Moist cleaning with lens-cleaning wipes which contain alcohol or a surfactant, or even simply water and washing-up liquid is, according to current scientific knowledge, also a useful means of removing corona or other viruses from the glasses after contact with people who have been coughing,“ explains Professor Egert.