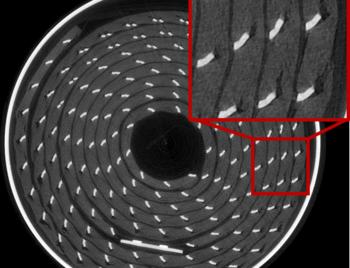 The x-ray tomography shows ruptures (black) in the regions of electrical contacts (white).

An international team has used neutron and X-ray tomography to investigate the dynamic processes that lead to capacity degradation at the electrodes in lithium batteries. Using a new mathematical method, it was possible to virtually unwind electrodes that had been wound into the form of a compact cylinder, and thus actually observe the processes on the surfaces of the electrodes.

Lithium batteries are found everywhere: They power smart phones, laptops, and electric bicycles and cars by storing energy in a very small space. This compact design is usually achieved by winding the thin sandwich of battery electrodes into a cylindrical form. This is because the electrodes must nevertheless have large surfaces to facilitate high capacity and rapid charging

An international team of researchers from the Helmholtz-Zentrum Berlin and University College London has now investigated the electrode surfaces during charging and discharging using for the first time a combination of two complementary tomography methods. Employing X-ray tomography at the European Synchrotron Radiation Facility (ESRF) in Grenoble, they were able to analyse the microstructure of the electrodes and detect deformations and discontinuities that develop during the charging cycles.

“Neutron tomography, on the other hand, made it possible to directly observe the migration of lithium ions and also to determine how the distribution of the electrolyte in the battery cell changes over time“, explains Dr. Ingo Manke, tomography expert at HZB. The neutron tomography data were obtained mainly at the HZB BER II neutron source at the CONRAD instrument, one of the best tomography stations worldwide.

Additional data were obtained at the neutron source of the Institut Laue-Langevin (ILL, Grenoble), where with the help of the HZB team of experts a first neutron imaging station is currently being set up.

Following the shutdown of BER II in December 2019, the CONRAD instrument will be transferred to ILL so that it will be available for research in the future.

A new mathematical method developed at the Zuse-Institut in Berlin then enabled physicists to virtually unwind the battery electrodes – because the cylindrical windings of the battery are difficult to examine quantitatively. Only after mathematical analysis and the virtual unwinding could conclusions be drawn about processes at the individual sections of the winding.

“The algorithm was originally meant for virtually unrolling papyrus scrolls”, explains Manke. “But it can also be used to find out exactly what happens in compact densely wound batteries.”

Dr. Tobias Arlt of HZB continues: “This is the first time we have applied the algorithm to a typical commercially available lithium battery. We modified and improved the algorithm in several feedback steps in collaboration with computer scientists of the Zuse-Institut“.

Characteristic problems with wound batteries were able to be investigated using this method. For example, the inner windings exhibited completely different electrochemical activity (and thus Lithium capacity) than the outer windings. In addition, the upper and lower parts of the battery each behaved very differently. The neutron data also showed areas where a lack of electrolyte developed, which severely limited the functioning of the respective electrode section. It could also be shown that the anode is not equally well loaded and unloaded with lithium everywhere.

“The process we have developed gives us a unique tool for looking inside a battery during operation and analysing where and why performance losses occur. This allows us to develop specific strategies for improving the design of wound batteries”, concludes Manke.