Harnessing the power of CRISPR in space and time 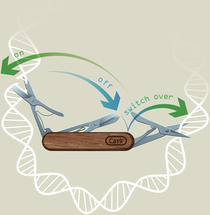 Researchers in Vienna from Ulrich Elling’s laboratory at IMBA – Institute of Molecular Biotechnology of the Austrian Academy of Sciences – in collaboration with the Vienna BioCenter Core Facilities have developed a revolutionary CRISPR technology called “CRISPR-Switch”, which enables unprecedented control of the CRISPR technique in both space and time.

CRISPR/Cas9 technology is based on a modified version of a bacterial defense system against bacteriophages. One of the landmark discoveries for this technique in fact was laid in Vienna and published in 2012 in a study co-authored by Emmanuelle Charpentier and VBC PhD student, Krzysztof Chylinski. Due to its power to also edit mammalian genomes, CRISPR/Cas9 has rapidly established itself as the most employed gene editing method in laboratories across the world with huge potential to find its way to the clinics to cure rare disease. Just a week ago, the first success in the treatment of sickle cell anemia was announced.

To control the power of genome editing, several groups have worked on systems to control editing activity. Scientists from the lab of Ulrich Elling at IMBA were now able to gain unprecedented control over sgRNA activity, in a system termed “CRISPR-Switch”.

The CRISPR-Switch system radically amplifies the application potential of CRISPR-based gene editing, as it can be rapidly switched on without any detectable leakiness. It also circumvents possible immune responses in vivo, as it is not based on the modulation of Cas9 expression as previous methods were.
In CRISPR-Switch from the Elling lab, gene editing is achieved by modulating sgRNA expression, using a system based on Cre-Lox and Flp-FRT recombinases. These are site-specific recombination systems, which allow a precise location and timing of gene expression. Cre and Flp are known for their high recombination efficiency in different cell types, as well as their precision.

By using the novel CRISPR-Switch method, scientists are able to target genes with superior specificity, and, due to the use of recombinases, a gene can be knocked out in one chosen cell type precisely. As additional level of control, multiple genes can now be knocked out in any desirable order. This allows for unprecedented versatility in the CRISPR technique, as the exact timing of gene activation can be studied in different pathologies both in vivo and in vitro. Together with IMBA Alumnus Daniel Schramek from the Lunenfeld-Tanenbaum Research Institute in Toronto, the authors studied the order of mutagenic events that would result in glioma formation in mouse models. The CRISPR-Switch method is versatile and can be applied to different tumor types thus detecting the exact sequence of genes needed to induce tumor formation. What bears incredible potential is that with this technique, not only tumor initiation can be studied, but also the very challenging topic of tumor maintenance can be tackled.

The shared-first author of the study, Maria Hubmann, explains: “Our in vivo studies in mice confirmed that an explicit order of gene knockout was necessary for tumor formation. We looked at two specific genes, NF1 and TRP53, which are known to have a strong link to glioblastoma. Only when we knocked out TRP53 before NF1, and not vice versa, the mice developed gliomas”.

“CRISPR-Switch allows us to control gene editing in space and time, while ensuring an incredibly rapid on/off switch and with minimal unspecific effects. I am excited about the future applications of our method, as I am sure labs all over the world will soon find its benefits,” explains Krzysztof Chylinski, shared-first author from the Vienna BioCenter Core Facilities.