Little Heaps of Silver, All Wrapped Up

Determination of the crystal structure of a DNA-stabilized silver nanocluster 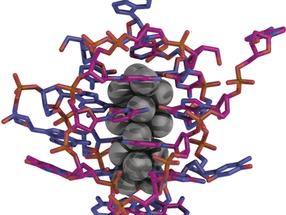 Nanoclusters are little “heaps” of a few atoms that often have interesting optical properties and could become useful probes for imaging processes in areas such as biomedicine and diagnostics. In the journal Angewandte Chemie, researchers have introduced a nanocluster of 16 silver atoms stabilized by a wrapping of DNA strands. Using X-ray analysis, they were able to determine the crystal structure and identify important interactions within it.

In contrast to solids or nanoparticles, nanoclusters, like molecules, can switch between discrete energy levels by absorbing or emitting light (fluorescence). Nanoclusters made of silver are especially interesting—in particular because they can fluoresce very brightly. Their optical properties depend strongly on the size of the nanoclusters, so it is important to make individual clusters with a precisely defined number of atoms. For several years, scientists have been using short DNA strands as biocompatible, water-soluble alternatives to conventional “templates”.

A team led by Tom Vosch at the University of Copenhagen, Denmark, and Jiro Kondo at Sophia University, Tokyo, Japan, have crystallized a nanocluster of exactly 16 silver atoms using a DNA sequence of ten nucleotides. The magenta crystals emit light in the near infrared when irradiated with green light, with nearly identical spectra as a crystal or in solution.

Structural analysis revealed that the Ag16 nanoclusters have a diameter of about 7 Å and a height of about 15 Å (1 Å is one ten millionth of a millimeter). Each nanocluster is tightly wrapped and almost completely shielded by two DNA strands in a horseshoe conformation. The two DNA strands are primarily bound by interactions with the silver atoms and to some extent by a few hydrogen bonds. Surprisingly, none of the Watson–Crick base pairing typically observed for DNA is found in this case. Additionally, novel silver–silver interactions were observed within the cluster.

Packing of the DNA–silver nanoclusters into the crystal is promoted by various interactions, including those between phosphate groups and calcium ions, and π-stacking between neighboring thymine nucleobases. The latter plays an important role in the crystallization process. Additionally, loosely associated silver cations are present within the crystal; some form a bridge between DNA bases, while others interact only with silver atoms within the core of the clusters.

These new insights could help to explain the relationship between the structural and emission properties of nanoclusters, and to develop a method for the synthesis of further monodisperse, biocompatible, water-soluble silver clusters with advantageous photophysical features for applications such as biomedical imaging.