A health check based on epigenetics 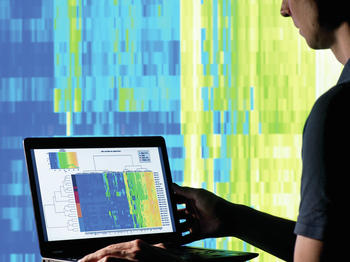 Data processing, analysis and evaluation are unified in a single user interface.

Chemical reactions and molecular modifications change the genome of each and every human over the course of their lifetime. These modifications can result in disease, but they also provide a basis for determining a person's biological age. Fraunhofer scientists participating in the project “DrugTarget” have now developed a method that can quickly check the condition of the genome. This will help develop points of intervention for new medicines and will help inform people how youthful their bodies are.

In the past it was thought that a person’s DNA remained unchanged throughout life. Today we know that the genome can change during aging, and that environmental factors and lifestyle can also play a role in the process. These changes include in particular what are referred to as methylation: During the methylation process, small methyl groups gradually accumulate at certain locations in the DNA (genome). This can switch genes off and increase the probability of genetic mutations at specific points, which can then result in disease.

“On the other hand, methylation is a natural process which takes place in every human body over time,” says Prof. Carsten Claussen of the Fraunhofer Institute for Molecular Biology and Applied Ecology IME in Hamburg. Methylation also controls for example certain biological processes in the body. But when methylation becomes abnormal, problems may result. Our lifestyle, diet, smoking, alcohol and other environmental factors can influence the level of methylation in our genomes, which continuously change over the course of life. “The changes in methylation indicate to some extent how the body is aging,” says Carsten Claussen. We can therefore determine a person’s biological age based on the degree of DNA methylation. Carsten Claussen and his team joined forces with scientists from the Fraunhofer Institute for Applied Information Technology FIT to develop a method for measuring biological age and have implemented the method as a demonstrator. In collaboration with Fraunhofer IME, cerascreen® GmbH has commercialized a Genetic Age Test based on this demonstrator.

Users take a buccal swab sample using the sterile cotton bud provided with the Genetic Age Test kit, and send it to the laboratory by (prepaid) post. The lab then conducts a methylation analysis using Next Generation Sequencing to determine the methylation state of the DNA. AI software developed at Fraunhofer IME is then used to analyze this data and derive the biological age from the methylation data. Initial tests conducted on approximately 150 subjects have shown that the algorithm works very well. Estimates of biological age for healthy individuals came remarkably close to the actual chronological ages of the subjects.

cerascreen® GmbH is primarily interested in offering the service to health-conscious individuals who would like to know how fit or biologically young their bodies are, whereas the Fraunhofer scientists are focusing on possible future medical applications. The researchers are now looking for compounds that are capable of specifically altering the methylation of certain genes in the hope of delaying the aging process and potentially prevent the development of diseases. “DrugTarget”, the name Fraunhofer scientists chose for their collaborative project is therefore highly appropriate. “Today there are enormous databases with thousands of compounds we want to test in the laboratory to find out whether they are effective in altering the methylation of inviduals,” says Carsten Claussen. The development of the active compounds will take place in the next phase of the project.

The first phase of the project was for Carsten Claussen and his team to develop an algorithm capable of identifying the methylation patterns which can be used to reliably predict age. “The algorithm is using previously unknown areas of the genome to predict age which is a very exciting discovery",” says Claussen, referring in particular to specific genes which may be therapeutically targeted in the future.

Fraunhofer FIT is in turn developing an application which unites data processing, analysis and evaluation in a single user interface. “Now we can link the methylation information with genes and compounds identified from international publically accessible databases in order to rank the targets for therapeutic intervention,” says Fraunhofer FIT’s Carina Goretzky. As the researchers, laboratory technicians and bioinformatics specialists involved have to work in different environments, the demonstrator unifies all the functions in a single application with intuitive visualisation tools. This will significantly simplify and accelerate progression of the “DrugTarget” project.

While the partner company plans to put the Genetic Age Test on the market as a life-style product, the medical application of the demonstrator will be subjected to further validaton studies.