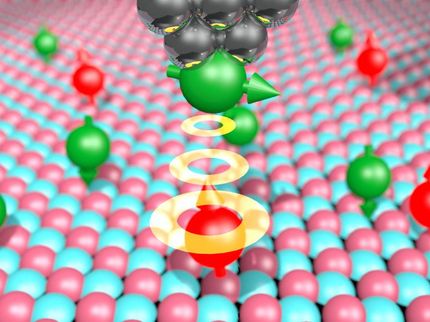 Single magnetic atoms are deposited on a surface of magnesium oxide. They are imaged by the magnetic tip of a scanning tunneling microscope which also allows researchers to perform an MRI scan of the atom's magnetic field.

Researchers at the Center for Quantum Nanoscience (QNS) within the Institute for Basic Science (IBS) at Ewha Womans University have made a major scientific breakthrough by performing the world's smallest magnetic resonance imaging (MRI). In an international collaboration with colleagues from the US, QNS scientists used their new technique to visualize the magnetic field of single atoms.

An MRI is routinely done in hospitals nowadays as a part of imaging for diagnostics. MRI's detect the density of spins - the fundamental magnets in electrons and protons - in the human body. Traditionally, billions and billions of spins are required for an MRI scan. The new findings, published in the journal Nature Physics, show that this process is now also possible for an individual atom on a surface. To do this, the team used a Scanning Tunneling Microscope, which consists of an atomically sharp metal tip that allows researchers to image and probe single atoms by scanning the tip across the surface.

The two elements that were investigated in this work, iron and titanium, are both magnetic. Through precise preparation of the sample, the atoms were readily visible in the microscope. The researchers then used the microscope's tip like an MRI machine to map the three-dimensional magnetic field created by the atoms with unprecedented resolution. In order to do so, they attached another spin cluster to the sharp metal tip of their microscope. Similar to everyday magnets, the two spins would attract or repel each other depending on their relative position. By sweeping the tip spin cluster over the atom on the surface, the researchers were able to map out the magnetic interaction. Lead author, Dr. Philip Willke of QNS says: "It turns out that the magnetic interaction we measured depends on the properties of both spins, the one on the tip and the one on the sample. For example, the signal that we see for iron atoms is vastly different from that for titanium atoms. This allows us to distinguish different kinds of atoms by their magnetic field signature and makes our technique very powerful."

The researchers plan to use their single-atom MRI to map the spin distribution in more complex structures such as molecules and magnetic materials. "Many magnetic phenomena take place on the nanoscale, including the recent generation of magnetic storage devices." says Dr. Yujeong Bae also of QNS, a co-author in this study. "We now plan to study a variety of systems using our microscopic MRI." The ability to analyze the magnetic structure on the nanoscale can help to develop new materials and drugs. Moreover, the research team wants to use this kind of MRI to characterize and control quantum systems. These are of great interest for future computation schemes, also known as quantum computing.

"I am very excited about these results. It is certainly a milestone in our field and has very promising implications for future research." says Prof. Andreas Heinrich, Director of QNS. "The ability to map spins and their magnetic field with previously unimaginable precision, allows us to gain deeper knowledge about the structure of matter and opens new fields of basic research."