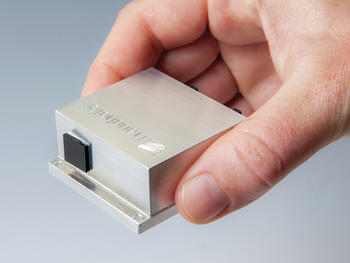 Together with partners from research and industry, Fraunhofer IAF has developed a hand-held scanner for hazardous substances within the EU project CHEQUERS. The sensor detects explosive, toxic and other dangerous substances in real time and will help emergency personnel with on-site detections at crime scenes, after accidents or terroristic attacks.

Police forces encounter a suspicious room during a house search – a room that could be anything: a drug or explosive laboratory or just a fake. In order to react immediately, they need to know which chemical substances they are confronted with. Usually, the analysis would be time consuming and would involve taking a sample and sending it to an external laboratory. Portable, eye-safe scanners with the ability to identify numerous chemicals fast and remotely up to a distance of 1 m do not exist to date.

Within the EU project CHEQUERS, the Fraunhofer Institute for Applied Solid State Physics IAF and its partners have jointly developed a hand-held scanner for the remote detection of explosives and hazardous substances. »Our hazardous substance scanner covers a large spectral range in no time, provides precise results and can even be used by untrained personnel. This is extremely useful at crime scenes, after terroristic attacks or after accidents in industrial plants in which chemicals spread in an uncontrolled way. Rescue forces can react immediately to the threat«, explains Dr. Stefan Hugger, project manager and scientist at Fraunhofer IAF.

The consortium of CHEQUERS faced the technical challenge to realize a hand-held system for remote detections of hazardous substances from a safe distance and with fast reaction time. The result is a measuring device based on infrared backscattering spectroscopy. The research team combined very fast widely tunable quantum cascade lasers with adjusted transmission and receiver optics, fast IR detectors and a fitting control and detection software.

The research took place within the project »Compact high performance laser sensors«, CHEQUERS for short (www.chequers.eu). Since 2015, Fraunhofer IAF collaborated with the Fraunhofer Institutes IPMS and CAP, the Federal Criminal Police Office, as well as the companies Vigo Systems, M Squared Lasers and Modus Research and Innovation, in order to develop a hand-held scanner for hazardous substances. CHEQUERS was funded by the European Union within the program Horizon 2020. On April 25, 2019, the project partners me to successfully close the project in Brussels.

Portable sensors for remote spectroscopic detections require especially compact and fast tunable laser sources. »Such devices need to compensate the inevitable movements of the hand and still be able to detect a conclusive spectrum within a short amount of time. Together with Fraunhofer IPMS, we have developed a miniaturized quantum cascade laser with an external resonator that is able to scan the whole spectral range of the QC laser chip within just a millisecond«, explains Hugger, who represented Fraunhofer IAF at the final meeting. The measuring principle is based on selective spectral lighting of the target in the wavelength range of 1000 – 1300 cm-1. The chemical substance is identified based on the intensity of the backscattered light and the illumination wavelength. The so-called spectral fingerprint is matched with the integrated database that contains a large amount of safety-relevant substances, and thus the substance can be identified.

The hand-held demonstrator succeeded at a series of test measurements conducted by the Federal Criminal Police Office in cooperation with Fraunhofer IAF in early 2019. »During the test measurements, the scanner for hazardous substances was able to detect many explosives and their precursor materials, and has thus proven that the technology works. The next step is to increase the robustness of the measuring system to make it ready for daily use«, closes Hugger.