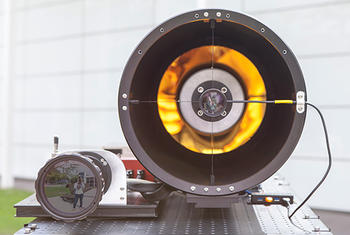 The quantum cascade laser developed at Fraunhofer IAF detects even faint traces of dangerous materials from a distance.

A network of different sensors is to detect illicit production of explosives and improvised explosive devices (IEDs). Traces on doorknobs, in sewage or in the air will be detected by the sensors and the data will be fused in a command center. The Fraunhofer Institute for Applied Solid State Physics IAF is developing an imaging laser technology which will allow a precise localization of the dangerous substances.

Terrorists can manufacture bombs with relative ease, few aids and easily accessible materials such as synthetic fertilizer. Not always do security forces succeed in preventing the attacks and tracking down illegal workshops in time. But bomb manufacturing leaves its traces: Remains of the synthetic fertilizer stick to stairs and doorknobs, waste from the manufacturing process gets into the sewerage and is deposited in air ducts. Until now, no technology for systematically discovering illegal bomb production in an early stage has been commercially available. Researchers have now developed a sensor network as part of the EU project »Emphasis« which can detect such activity early on and locate it precisely.They showed how a simple kitchen used to manufacture explosives can be tracked down at the test site of the Swedish Defence Research Agency (FOI) near Grindsjön in southern Sweden.

To keep the rate of false alarms as low as possible, different sensor technologies for early and precise localization of illegal bomb manufacturing are implemented. The sensors are placed at different locations such as on apartment buildings or in sewers. Thus waste produced during the manufacturing of explosives and bombs can be detected early on. In the command center, the data from all sensors is collected and automatically analyzed. Suspicious results trigger the alarm. With the help of laser-based measurement techniques, security forces can then localize the bomb workshop from a distance. The infrared laser system of Fraunhofer IAF in Freiburg evaluates the data from the spectroscopic measurements directly and shows the results on a monitor.

»Our laser technology can reliably detect even faint traces of dangerous substances from a distance of about 20 meters«, says Dr. Frank Fuchs, who leads the project at Fraunhofer IAF. This reduces the safety risk for the operational forces. The implemented quantum cascade lasers emit in the infrared area and so do not endanger the human eye. The wavelength area between 7.5 and 11 micrometers is well-suited for sensorics anyway: The molecules of organic compounds absorb very strongly in these wavelengths. Chemical compounds show specific absorption lines in this area. They can thus be exactly determined using these characteristic »fingerprints«.

Quantum cascade lasers can solve many of sensorics’ problems

Laser-based spectroscopy combined with a real-time visualization of the measurement results will solve many of sensorics’ problems in the future. At airports or train stations, laser technology can be implemented to check suspicious luggage for explosives. It also promises quick and precise spectroscopic measurements without costly laboratory examinations when controlling food, medicine or drinking water. The source of pollution could be found more quickly in factories and production halls. »Quantum cascade lasers can principally be used wherever the chemical nature of a surface or its change through pollution is of interest«, says Fuchs. »As our lasers are widely tunable, they can be adapted specifically for different issues and be the basis for highly sensitive sensors in different applications«.

The goal of the EU project EMPHASIS (Explosive Material Production Hidden Agile Search and Intelligence System) is to develop and test a system concept for detecting ongoing illicit production of explosives and improvised explosive devices (IEDs) in urban areas. The project is funded by the EU as part of the Seventh Framework Programme (FP7). Under the coordination of the Swedish Defence Research Agency FOI, the following partners are working on the project: the Fraunhofer Institutes for Applied Solid State Physics IAF and for Chemical Technology ICT, the Netherlands Organisation for Applied Scientific Research TNO, the Institut National de Police Scientifique from France and the companies Cascade Technologies from Scotland, Morpho S.A. from France as well as VIGO System S.A. from Poland.