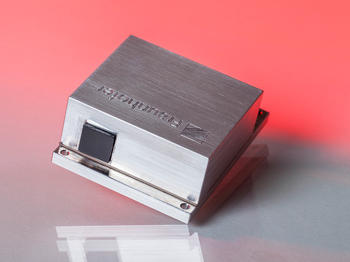 Miniaturized wavelength tunable μEC-QCL with emission wavelengths in the mid-infrared range and a high scanning frequency up to 1 kHz.

Imagine holding two different medications in your hands, one being the original, the other one being a counterfeit. Both appear exactly the same. Is there any way for you to distinguish them? The answer is: yes. Our quantum cascade laser (QCL) has the ability to identify substances in a split second.

The technology behind the innovation is called backscattering spectroscopy. It exploits the fact that every chemical substance absorbs an individual amount of infrared light. »If we irradiate a substance with a specific light source, we receive a very characteristic backscattering signal« describes Dr. Ralf Ostendorf, head of the Business Unit »Semiconductor Lasers« at the Fraunhofer Institute for Applied Solid State Physics IAF in Freiburg. The mid-infrared spectrum (MIR) is particularly well-suited for an unambiguous identification of substances. Within this spectrum, light has a wavelength of three to 12 micrometers. If molecules are irradiated with this light, they show a characteristic absorption behavior which the QCL measuring system picks up on. In only a few milliseconds the QCL can be adjusted to individual absorption lines that lie within a broad spectral band. This means that a great deal of information about a substance’s absorption behavior can be detected in a very short time. »Very precise conclusions are available due to the laser’s high spectral brilliance and the fast wavelength tuning - similar to a human fingerprint« explains Ostendorf. The developed QCL consequently manages to detect even the smallest amounts of a particular substance in real time, which is a significant improvement compared to previous systems.

The miniaturized quantum cascade lasers are being developed by scientists at the Fraunhofer IAF together with colleagues from the Fraunhofer Institute for Photonic Microsystems IPMS in Dresden. Fraunhofer IAF is working on the laser chips while Fraunhofer IPMS is responsible for an integrated MOEMS scanning grating. The MOEMS scanner allows continuous tuning of the wavelength and thus allows a very fast signal response.

Currently, the project team is making the lasers fit for application in the pharmaceutical industry. The researchers have already used their method to reliably determine the active ingredients of everyday pills for headaches and fever in a laboratory environment. Future application scenarios foresee the technology in the mass production of pharmaceuticals as a real-time control. Already during the production process defective medical preparations could be sorted out. »Not only is it possible to quickly sort out faulty margins, but also to reliably detect drug plagiarism. A time-consuming and expensive manual control in the laboratory would be obsolete« Ostendorf sums up the added value.

The method was first used in security technology: In the EU project »CHEQUERS«, Fraunhofer IAF developed a portable detector based on quantum cascade lasers which can detect explosive or toxic substances from a safe distance. The Freiburg researchers are currently contacting industry partners in order to further develop their approach. Ostendorf outlines future challenges: »Initial talks have already taken place. In a next step, we want to use our sensors to detect individual substances in a drug mixture«.