Mini-Spectrometers - From the smallest component to the dedicated measurement system
12-Feb-2018 - University of California, San Diego 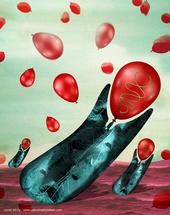 Cryo-electron tomography images of a forespore inflated by DNA (left) and of a deflated forespore in the absence of DNA (right). The membranes are highlighted in pink and purple.

As a basic unit of life, the cell is one of the most carefully studied components of all living organisms. Yet details on basic processes such as how cells are shaped have remained a mystery. Working at the intersection of biology and physics, scientists at the University of California San Diego have made an unexpected discovery at the root of cell formation.

Biologists Javier Lopez-Garrido, Kit Pogliano and their colleagues at UC San Diego and Imperial College in London found that DNA executes an unexpected architectural role in shaping the cells of bacteria.

Studying the bacterium Bacillus subtilis, the researchers used an array of experiments and technologies to reveal that DNA, beyond serving to encode genetic information, also "pumps up" bacterial cells.

"Our study illustrates that DNA acts like air in a balloon, inflating the cell," said Lopez-Garrido, an assistant research scientist in UC San Diego's Division of Biological Sciences and the study's first author. "DNA is best known for being the molecule with genetic information but it's becoming more and more obvious that it does other things that are not related to that."

The researchers say the results could have relevance in human cells in terms of how they are generated and shaped, as well as aid explanations of basic mechanical processes and the structure of the nucleus and mitochondria. The results could also allow scientists to have a glimpse into the origins of cellular life itself. Modern bacterial cells have evolved a variety of mechanisms to control their internal pressure, said Lopez-Garrido. However, those mechanisms were absent in primitive cells at the dawn of life on earth. The finding that DNA can inflate a cell might allow scientists to achieve a better understanding of the physiology of the first cells on the planet.

"Biologists tend to think of cell growth as following normal, biosynthetic pathways, but we found a pathway that is not normal, as it does not depend on processes normally required for growth," said Pogliano, a professor in the Section of Molecular Biology and the paper's senior author. "All you need for this cell to grow is to inflate it with DNA and its associated positively charged ions, and the ability to make more membrane so the cell can get bigger. Nothing else seems to be required."

The researchers employed time-lapse fluorescent microscopy to methodically track cell formation in Bacillus subtilis through a process known as sporulation. During this process cells split into a mother cell and a smaller cell, or forespore. Also using cryo-electron tomography to capture extreme close-ups of the process unfolding, the researchers witnessed the mother cells inflating the forespore with DNA in a stretching and swelling process, ultimately leading to a new, egg-shaped cell.

"It's amazing how we are just beginning to scratch the surface of how physics impacts living organisms," said Pogliano. "This is a unique example of a very simple biophysical property impacting cell shape and it illustrates the value of physicists working closely with biologists. Understanding how physics and biology intersect is a huge area for future growth."