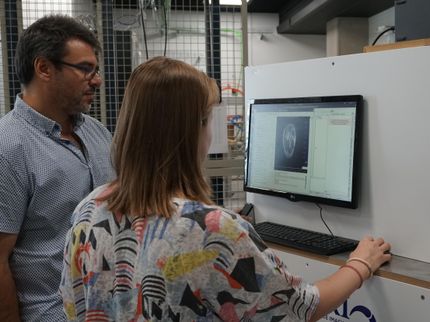 A research group at the Institute of Instrumentation for Molecular Imaging (i3M), a joint center of the Spanish National Research Council (CSIC) and the Polytechnic University of Valencia (UPV), has developed the first low-cost, portable magnetic resonance imaging technology with high diagnostic quality. It is a scanner to take images of arms and legs, lightweight and low power consumption (half that of a microwave oven). The device, which uses three i3M patents and in whose development its spin-off PhysioMRI Tech SL is collaborating, has obtained the first magnetic resonance images outside clinical settings with diagnostic utility. The results are published in Scientific Reports.

The device developed at the Valencian research center drastically reduces the cost of magnetic resonance imaging devices from one million euros to about 50,000 euros. In addition, it is much lighter, only 250 kilos compared to the thousands of current devices, so that "it is the first model that could be taken to the patient's home," explains Joseba Alonso, CSIC researcher leading the project.

The cost and weight are reduced by moving from a superconducting magnet, such as those used in large particle physics experiments, to one based on a matrix of about 5,000 small permanent magnets, such as those found in refrigerators. "The trade-off is that this lowers the magnetic field strength and, therefore, the maximum resolution of the image," Alonso acknowledges. "However, there are many applications where there is no need for all the resolution provided by expensive hospital machines, and at the same time it opens up a whole new range of possibilities."

Reducing the magnetic field allows the system developed by i3M to be compatible with situations in which magnetic resonance imaging was automatically ruled out, such as use in the operating room or in the case of patients with pacemakers or tattoos. In addition, by reducing the weight of the device, the system can be mounted on a trolley and be used in patients' homes, homes for the elderly or people with reduced mobility, outpatient clinics and small clinics, intensive care areas, emergency rooms, operating rooms and medical vehicles. Access may also be extended to developing countries, field hospitals and sporting events, among others.

MRI outside the clinic

Thus, the i3M team, in collaboration with the center's spin-off PhysioMRI Tech SL, has obtained the first MRI images outside clinical settings: in an office, outdoors (powered by a small generator), and even in the patient's home. "All the images obtained are of sufficient quality to diagnose a multitude of lesions and diseases," says Alonso, a quality confirmed by radiologists at the Hospital Universitario y Politécnico La Fe in Valencia.

"To compensate for the loss of magnetic field compared to conventional systems, we use our patented pulse sequences, which are highly efficient both in terms of spatial coding capacity and image reconstruction. This is how we achieve diagnostic-quality images," describes the CSIC researcher.

For Alonso, "this scanner is a first step towards the democratization of magnetic resonance imaging, which is the most prized medical imaging technique but very limited in its accessibility due to the very high associated costs". The next steps to be taken for the device to reach the market consist of carrying out exhaustive studies to demonstrate the clinical value of the machine, as well as passing a series of tests (safety, electromagnetic compatibility, materials, etc.) that will allow it to be approved by the health authorities of the European Union and the United States.

Note: This article has been translated using a computer system without human intervention. LUMITOS offers these automatic translations to present a wider range of current news. Since this article has been translated with automatic translation, it is possible that it contains errors in vocabulary, syntax or grammar. The original article in Spanish can be found here.