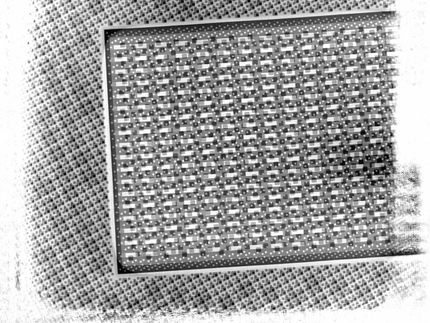 A new method speeds up X-ray imaging of extended samples like microchips. The innovative technique makes it possible to study relatively large objects to nanometre fine details in a reasonable amount of time. That is not only interesting to science but also to industry, as the developer team led by DESY scientist Mikhail Lyubomirskiy writes in the journal Scientific Reports.

“X-rays have the power to reveal extremely small details,” says Lyubomirskiy. “However, X-ray imaging is not as straight forward as photography with an optical camera.” There are no off-the-shelf lenses and cameras for X-rays. Instead, scientists often use a technique called ptychography. It works without imaging lenses by scanning the sample in fine steps and recording how the X-rays get diffracted (scattered) by it. Ptychography can reach the highest resolution possible, but the step size while scanning has to be smaller than the diameter of the X-ray beam, resulting in a vast number of steps across an extended sample.

This often limits sample size to the micrometre scale, for practical reasons. A micrometre is a thousandth of a millimetre. Many objects of interest to science and industry are much larger, for instance in the millimetre regime like a microchip. Using beamline P06 at DESY’s X-ray source PETRA III, Lyubomirskiy’s team now found a seemingly obvious solution to the speed problem: Using more than one beam to record multiple patterns at the same time. But to do so, the scientists had to overcome a major obstacle: How do you discern the diffraction patterns of the different beams?

“We developed a scheme where the identity of each beam is encoded in its unique phase and shape,“ explains Lyubomirskiy. Like a light wave, X-rays oscillate while they travel. The position of this periodic oscillation at a certain time or at a certain place is called the phase. The scientists made sure each X-ray beam arrives at the sample with a different phase structure and shape. Unfortunately, X-ray detectors do not directly record the phase of a wave reaching them. But in ptychography, the characteristics of the scatter image depend on the phase structure the X-ray beam has when it hits the sample. With some clever mathematics, the researchers can discern the different diffraction pattern contributions of the corresponding phase-structured X-ray beams.

This innovative scheme speeds up imaging substantially. “In essence, twice as many beams halve the necessary time,” explains the DESY physicist. “For demonstration, we scanned a microchip with three beams which took roughly a third of the usual time.” For an area of 80 by 80 micrometres, the three-beam-scanning needed one hour and a quarter. The resulting image has a resolution of 95 nanometres (millionths of a millimetre). “In a later experiment we have already used six beams, and the method can also be extended to nine or possibly even twelve beams,” says Lyubomirskiy.

“The need to image large samples quickly with the highest spatial resolution exists in many fields in science and industry and will increase with future needs in materials design,” the authors write. They expect multi-beam ptychography to be useful for rapid high-quality imaging in many applications. Such as in catalytic research, recently, the authors and their collaborators received 1.2 million euros for four years in research funding from the Röntgen Ångström Cluster (RÅC), a Swedish-German science collaboration. They will establish a framework for operando microscopy of catalytic reactions at PETRA III and MAX IV.