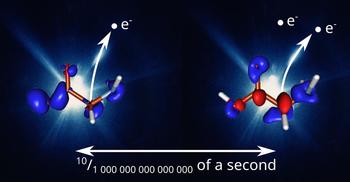 In the prump-probe experiment the glycine molecule is first ionised by the high intensity X-ray pulse from DESY's free-electron laser FLASH (left). This induces a correlated motion of the valence electrons and holes, depicted by red and blue lobes. After a variable time delay from 0 to 175 femtoseconds the probe pulse samples the state of the glycine ion and electron motion through further ionisation and measurement of the ionisation products (right). In this example, a time delay of 10 femtoseconds is depicted, which shows two extrema of the oscillatory electron/hole motion, i.e. a half period of the electron coherence.

An international research team led by DESY scientist Tim Laarmann has for the first time been able to monitor the quantum mechanically evolving electron charge distribution in glycine molecules via direct real-time measurement. The results – obtained at DESY´s brilliant free-electron laser FLASH – are published in the scientific journal Science Advances. Better knowledge of the quantum effects in the motion of electrons at the molecular level can pave the way to controlling, optimising, and engineering ionising radiation to be used for example in radiotherapy for cancer treatment.

“The amino acid glycine is an abundant basic building block of proteins and plays part in the recognition sites on cell membranes and enzymes,“ says Laarmann. “Due to its compact nature and tendencies to form hydrogen bonds it facilitates protein folding in biomolecular reactions. Stand-alone, it is utilized as an inhibiting neurotransmitter in the central nervous system.” Glycine has also been found in space and is therefore a first signature of extra-terrestrial life. The molecular reactivity in the harsh astronomical environments is an important aspect, and in particular how isolated molecules interact with ionizing radiation is a key question in astrochemistry.

When energetic radiation hits a glycine molecule, often one of its electrons gets knocked out of the molecule. In the resulting glycine ion, the electronic charge begins to redistribute itself, resulting in a time-dependent oscillation of the charge density. To ionise glycine, the team used the ultra-short pulses from FLASH, each lasting less than five femtoseconds, that is 5 quadrillionths of a second. “With these flashes and by applying sophisticated data processing algorithms we could surgically take out one of glycine's 40 electrons from a particular orbital,” reports first author David Schwickert from DESY who did his PhD on this project.

The scientist then used FLASH as a flash camera to record stills of the movement of the electronic charge. “For the first time, we could perform direct real-time measurements of the electron dynamics in this complex amino acid molecule, following ionisation,” explains Laarmann. The observations result in a movie showing 175 femtosecond of the oscillating electronic charge and how it affects nuclear motion. While the initial knock-out of the electron results in a positive charge at a specific atom in the molecule, the following charge oscillation creates a force field that makes the nuclei move as well.

Quantum mechanically, the outgoing electron leaves behind the molecular ion in a so-called coherent superposition of eigenstates. This coherence influences the way the molecule reacts chemically. Understanding this quantum behaviour may open a path to make biomolecules act in a desired way. “A prerequisite for any control of electronic and nuclear dynamics towards specific molecular reaction pathways is a detailed analysis of structural properties, when the molecule is driven out of equilibrium and here in particular the analysis and control of time-dependent electronic structure defining the potential energy landscape in which the nuclei move,” explains co-author Marco Ruberti from Imperial College London, who performed many-electron simulations of glycine together with a colleague from Charles University in Prague. “In agreement with our simulations, the glycine experiments at FLASH provide direct support for the existence of long-lived electronic coherence in photoionised biomolecules.”