Physicists use a single trapped ion to detect ultracold molecules 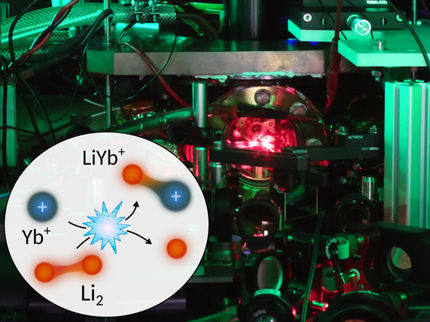 Drawing of the studied collision between an Yb ion and a Li2 Feshbach molecule, resulting in a LiYb+ molecular ion. The background shows a view of the hybrid ion-atom experiment at the University of Amsterdam.

When we think of ions, we usually think of single atoms that have lost or gained some electrons, but entire molecules can also become ions. In a new publication that was highlighted as an Editor’s Suggestion in Physical Review Letters, physicists from the University of Amsterdam, QuSoft and Stony Brook University, show that cold molecular ions can be created using a new method, and that they are a very useful tool for detecting small amounts of other, regular molecules.

An ion is an atom or molecule with a surplus or shortage of electrons. Being charged particles, ions can be ‘trapped’ by electromagnetic fields: it is easy to keep them in a fixed position. Trapped ions constitute a promising platform for quantum computation. The reason for this is that they can be stored for a long time, and that modern lasers allow physicists to control single ions very precisely. These properties also make trapped ions into prime candidates to study chemical reactions, especially when they are immersed in a bath of regular atoms or molecules.

In many physics experiments, it is useful to study particles that are extremely cold – simply because cold particles move slower and vibrate less, so there is less ‘noise’ in the experiment. So far, ion-molecule studies have been limited to cold molecules with temperatures around 1 kelvin (i.e. one degree above the absolute zero temperature), but the hybrid ion-atom experiment at the University of Amsterdam now uses molecules with temperatures of only a few millionths of a kelvin, studying the coldest ion-molecule collisions in the world.

Physicists led by Rene Gerritsma from the UvA-Institute of Physics and QuSoft in collaboration with Arghavan Safavi-Naini (UvA/QuSoft) and Jesus Pérez-Ríos (Stony Brook University), measured the molecular ion created in a chemical reaction where lithium molecules (Li2) and atomic ytterbium ions (Yb+) turn into lithium atoms (Li) and molecular lithium-ytterbium ions (LiYb+). They were able to use this chemical reaction to sense very small amounts of molecules.

Besides their numerous other uses, such as their use in extremely precise clocks and quantum simulations of many-body systems, ultracold gases can also be used to create cold molecules. Using a technique called magneto-association, so-called Feshbach dimers can be created from an ultracold gas – molecules that are as cold as the gas that their parts came from. Combining these molecules with a single trapped ion, IoP physicists Henrik Hirzler, Rianne Lous and Eleanor Trimby observed for the first time ion-molecule chemical reactions with ultracold molecules.

The group then found that their methods were very sensitive: they could use the reaction Li2 +Yb+ → LiYb+ + Li to detect only about 50 molecules in a cloud of 20,000 atoms. For such trace amounts of molecules, normal imaging techniques typically fail. Therefore, the ion could be used as a much better sensor for the molecules. This result is a first step towards being able to probe quantum states of matter with only a single ion as a detector.

The observed cold chemical reaction also points to a new method to get cold and controllable molecular ions. Those are especially interesting for precision spectroscopy and for a better understanding of ultracold collisions and chemistry.