Seeing the world through different eyes

An entire IR camera on a chip 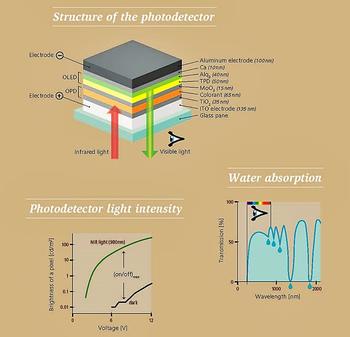 Short-wave infrared light (SWIR) is useful for many things: It helps sort out damaged fruit and inspecting silicon chips, and it enables night vision devices with sharp images. But SWIR cameras have so far been based on expensive electronics. Researchers at Empa, EPFL, ETH Zurich and the University of Siena have now developed a SWIR screen consisting of just eight thin layers on a glass surface. This could make IR cameras useful everyday objects.

Infrared (IR) light is invisible to humans. However, some animals, such as rattlesnakes or bloodsucking bats, can perceive IR radiation and use it to find food. But even for humans, the ability to see in the short-wave IR (SWIR) range would sometimes be useful. With the help of starlight alone, one could see quite sharply at night. Mechanics would be able to see the heat of a soldering tip at a glance. And fruit merchants could detect damaged produce even before the rotting process begins.

But IR light has a "problem": It is weaker than visible light and than UV light on the other side of the light spectrum. So while UV light makes white shirts and dancers' teeth glow blueish in a club – all it takes is a fluorescent dye in the laundry detergent – IR light is difficult to make visible for the human eye. This is because dyes can convert high-energy light directly into low-energy light, but not the other way around.

An entire IR camera on a chip

So IR cameras require sophisticated electronics to capture IR light, an electronic amplifier, and finally a screen to display the artificially generated image. This is expensive. Today's standard SWIR cameras for industrial use cost around 7,000 Swiss francs.

Empa researchers Roland Hany, Karen Strassel, Wei-Hsu and Michael Bauer have now succeeded in capturing SWIR light – and making it visible – with a single component. The device developed at Empa is basically an OLED display with three additional layers. IR light falls through an electrically conductive glass pane onto a dye layer in a photodetector. Therein, electrons begin to migrate, their motion being amplified by an electrical voltage. The electrical charges then migrate into the OLED layer, where they produce a green light spot. Electronic signal processing by a computer is not necessary: The incoming (invisible) SWIR light is amplified in an "analog" way, so to speak, and displayed directly on the screen. The color of the emitted visible light – blue, green, yellow or red – can be adjusted by selecting the dye in the OLED.

Useful for night vision – and for sorting beans

SWIR light is useful for many applications in the food industry, logistics or crafts. For example, one can visualize the temperature of soldering tips or monitor the cooling of newly manufactured jars and bottles. SWIR light makes moist objects appear darker, which is useful for sorting coffee beans or black olives: Stones and metal objects as impurities shine brightly among all the dark (moist) fruit on a conveyor belt.

The key to Roland Hany's SWIR screen is special dyes that he and his colleagues have been investigating for quite a while, so-called squaraines. The name comes from the basic structure of the chemical molecule, squaric acid. This class of dyes was first discovered in the 1960s and is characterized by deep colors and a high temperature stability. The researchers chemically modified the squaric acid so that it absorbs in the range of SWIR light. "Right now, we're working with dyes that absorb at just under 1000 nanometers," Hany says. "But we're already working on shifting the absorption to longer wavelengths, further into the IR range. If we succeed, our sensor will be able to detect water and moisture much better than it does now."

In search of an industrial partner

Hany likes to call the module he developed with his group OUC, or organic upconversion device. That's because it converts weak IR light into stronger, visible light ("upconversion") and works by using thin layers of dye made from carbon-based chemistry ("organic"). One problem is that the know-how to manufacture organic optoelectronic devices on an industrial scale is mainly located in Asia. Hany is confident, however, that his discovery will soon come to fruition: "Right now, we're working on increasing the sensitivity of the module and improving its long-term stability."