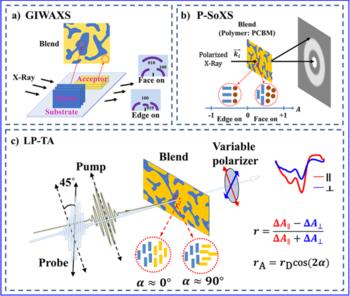 X-ray scattering is widely used to study the molecular packing morphology of organic donor and acceptor materials in the active layer. Grazing incidence wide-angle X-ray scattering (GIWAXS) shows the side or face stacking direction of the donor and acceptor phases relative to the substrate (Figure 1a), but it cannot distinguish the relative direction between the two phases at the interface.

Although the relative orientation between anisotropic donor and isotropic fullerene acceptor phases can be measured based on the polarization resonance soft X-ray scattering method (P-SoXS) (Figure 1b), the rise of non-fullerene solar cells presents new challenges to describe the local molecular orientation at the interface of two anisotropic phases.

The research group of Professor Wang Cheng at Xiamen University and his collaborators made use of Linear Polarization-selective Transient Absorption (LP-TA, the schematic diagram is shown in Figure 1c) to study the molecular orientation at heterojunctions of all-small-molecule organic solar cells. By selectively recording the polarization component of the probe signal aligned parallel or perpendicular to the linear polarization of the pump pulse, the anisotropy calculated from the transient absorption signal is used to estimate the angle between the donor and acceptor molecules at their interfaces.

They used LP-TA spectroscopy to detect the molecular orientation of bulk heterojunctions in three all-small-molecule organic solar cells. The angle between interfacial donor and acceptor molecules is calculated by the initial anisotropy value of the transient absorption signal corresponding to charge separation process. On the other hand, the dynamics of anisotropy give a hint of the dissociation and separation process of the electron/hole pair away from the interface. For the ZR1:Y6 (PCE: 14.3%) blend, the analysis showed that the angle between ZR1 and Y6 molecules at the interface was close to 90°. In contrast, similar experiments on the B1:BO-4Cl (PCE: 15.3%) blend showed that the B1 and BO-4Cl molecules are parallel to each other at the interface. BTR: BO-4Cl (PCE: 11.3%) interface is more disordered and has a random relative orientation. By analyzing the charge separation kinetics, the charge separation efficiency of the B1:BO-4Cl interface where the molecules are oriented in parallel is higher than that at the ZR1:Y6 interface where the molecules are oriented vertically (70%>63%).

These observations provide complementary information for X-ray scattering measurements and highlight polarization-selective transient absorption spectroscopy as a tool to probe the interface structure and dynamics of key photophysical steps in energy conversion.