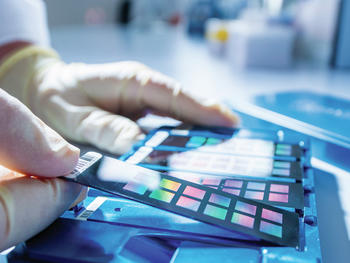 In March of 2020, thousands of scientists around the world united to answer a pressing and complex question: what genetic factors influence why some COVID-19 patients develop severe, life-threatening disease requiring hospitalization, while others escape with mild symptoms or none at all?

A comprehensive summary of their findings to date, published in Nature, reveals 13 loci, or locations in the human genome, that are strongly associated with infection or severe COVID-19. These results come from one of the largest genome-wide association studies ever performed, which includes nearly 50,000 COVID-19 patients and two million controls.

The work also involved members of the Cluster of Excellence “Precision Medicine in Chronic Inflammation” (PMI) from the Institute of Clinical Molecular Biology (IKMB) at Kiel University (CAU) and Schleswig-Holstein University Hospital (UKSH), Kiel Campus. The team led by Professor Andre Franke, director of the IKMB and steering committee member in the Cluster PMI, had already identified the first genetic risk factors early in the pandemic, in spring 2020, and published them in the renowned New England Journal of Medicine (NEJM). Statistical data from that work informed the new global study.

The work was done by the COVID-19 Host Genomics Initiative. The initiative has grown to be one of the most extensive collaborations in human genetics and currently includes more than 3,500 authors and 61 studies from 25 countries. To do their analysis, the consortium pooled clinical and genetic data from the nearly 50,000 patients in their study who tested positive for the virus, and 2 million controls across numerous biobanks, clinical studies, and direct-to-consumer genetic companies. Because of the large amount of data pouring in from around the world, the scientists were able to produce statistically robust analyses far more quickly, and from a greater diversity of populations, than any one group could have on its own.

"In total, hundreds of studies worldwide were included in this meta-study, which has now been published, so the significance of this work is particularly high," Franke emphasizes. "It was only possible because so many researchers collaborated so openly and shared data transparently. This has not happened on this scale before and is an excellent example of how science can work quickly and efficiently," Franke continues.

The Kiel team, in collaboration with other research groups, had identified two specific areas in the genome in spring 2020 that increase the risk of SARS-CoV-2 infection and severe COVID-19 progression: First, they found an abnormality in the blood group trait gene: people with blood group A are thus at higher risk for infection than people with other blood groups. People with blood group 0, on the other hand, are better protected from COVID-19 disease. "The work now available has clearly confirmed, with an even much larger amount of data, that genetic variation in the blood group gene influences the risk of infection," summarizes Professor David Ellinghaus, scientist at the IKMB and member of PMI.

In addition, Franke's team had found a second region in the genome in the previous work that influences both the general susceptibility to infection and the severity of a COVID-19 disease - namely on chromosome 3. "This locus even proved to be the most statistically significant of all 13 risk loci in the study now available and occurs constantly in the studies included," emphasizes Dr. Frauke Degenhardt, biostatistician at the IKMB. "Thus, the change in this gene region probably plays a particularly important role with regard to susceptibility to infection and to the severity of COVID-19 disease," Degenhardt adds.

"Building on the risk genes described, it is now possible to analyze in more detail which functions are hidden behind them. What do the genetic changes in these areas lead to, what do they do in the body? With a more precise understanding of these mechanisms, it may be possible to find targets for therapy against COVID-19," Franke explains.

The researchers will continue to study more data as they come in and update their results through the “Matters Arising” format at Nature. They will begin to study what differentiates “long-haulers”, or patients whose COVID-19 symptoms persist for months, from others, and continue to identify additional loci associated with infection and severe disease.