Promising assays of how to measure these membrane functions 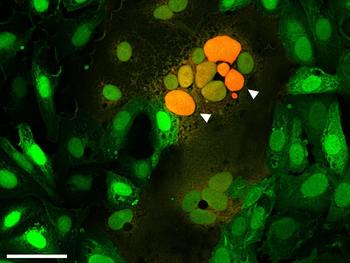 Microscopic image of cells fused by the spike protein. The arrows point to the attachment of cell cores from several fused cells to each other (orange).

The Coronavirus SARS-CoV-2 enters human cells by membrane fusion after contact of its spike protein with the ACE2 receptor. New studies provide proof for a second role of the protein in COVID-19: Fusion of body cells. A research team of the Paul-Ehrlich-Institut has developed promising assays of how to measure these membrane functions. Smallest amounts of spike protein present in cell culture suffice to allow infected and non-infected cells to fuse and die. Virus particles with spike protein on their surface can cause cells to fuse with their neighbours even by contact alone.

Spike protein S plays a major role for the infectivity of coronavirus SARS-CoV-2 and the course of infection (pathogenicity). Fused cells in the lungs of patients who died of COVID-19 give rise to the assumption that the spike protein of SARS-CoV-2 not only enables the virus to enter cells but also to fuse infected cells with non-infected ones.

An interdisciplinary research team at the Paul-Ehrlich-Institut (PEI) led by Professor Christian Buchholz, head of the research group „Molecular Biotechnology and Gene Therapy“, studied, in cell culture, to what extent the spike-protein-mediated membrane fusion takes place. For this purpose, the team developed assays to quantify the processes. They are based on a method which was already used for the quantification of cell fusion mediated by the human immunodeficiency virus (HIV). In doing so, a so-called “reporter”, the activity of which can be identified with the aid of chemical reactions, is broken up into two parts (alpha and omega). In cell culture, one cell type receives the alpha, the other one, the omega fragment. The complete reporter is formed only if the two cell types fuse – through the connection between the alpha and the omega fragment. This reporter can be quantified by flow cytometry and fluorescence microscopy. The findings are also supported by Western Blot data.

Another finding of the research group is that although the administration of the serum including the neutralising antibody from patients who had recovered from COVID-19 very efficiently inhibited membrane fusion mediated by the spike protein, it did not inhibit fusion of cells carrying the spike protein amongst each other.

The strong fusogenicity, i. e. the pronounced ability of the SARS-CoV-2 spike protein to cause the cells to fuse, could play an important role for the pathogenicity and the persistence of the virus infection – as, for example is the case with measles and herpes viruses. Based on the research group’s results, neutralising antibodies may not completely inhibit these fusion processes.

“The methods developed by us permit a very sensitive examination of the SARS-CoV-2 mediated membrane fusion. They can be used both for basic research and for the screening of active compounds against COVID-19. Another benefit is the comparison of these processes for different SARS-CoV-2 virus variants. This could provide an essential contribution to understanding these new variants and their pathogenicity”.