Detect neurodegenerative diseases such as Alzheimer's by a simple eye scan?

Milestone on the way to early diagnostics: Researchers use spectroscopic means to decipher the biochemical composition of the retina 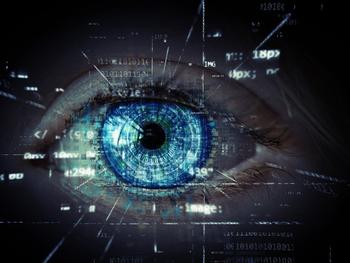 The researchers use spectroscopic means to decode the biochemical composition of the retina - its molecular fingerprint. In this way, they can detect minimal changes even before they are reflected in the retina (symbolic image).

Diagnosing Alzheimer's disease through a non-invasive eye scan long before symptoms appear: a European research team involving Leibniz IPHT has come one step closer to achieving this goal. Using a laser-based method, the researchers have succeeded in discriminating between healthy and Alzheimer’s disease retinal tissue on the basis of its spectral fingerprint. Unlike previous studies, the researchers do not rely on the controversial detection of certain biomarkers - such as protein deposits typical of Alzheimer's - but use spectroscopic means to decipher the biochemical composition of the retina. In this way, they can detect minimal changes even before they are reflected in the retina. This would allow them to detect signs of developing Alzheimer's disease much earlier than is possible with current methods.

This would allow them to detect signs of developing Alzheimer's disease much earlier than is possible with current methods.

"Fine biochemical modifications probably take place even before they show up on the retina," explain Dr. Clara Stiebing and Dr. Izabella Jahn of Leibniz-IPHT, first authors of the study. While morphological changes in the retinal layers can be diagnosed in vivo using standard optical coherence tomography (OCT), deviations in biochemical composition cannot be detected in this way. "This is where Raman spectroscopic investigation provides a crucial contribution to improving the accuracy of diagnosis," said Professor Jürgen Popp, scientific director of Leibniz IPHT.

Together with the Medical University of Vienna and partners from the Netherlands, the team from Leibniz IPHT is developing a novel diagnostic platform for age-related eye diseases and Alzheimer's disease. It combines Raman spectroscopy with OCT. "With the latest results, we have reached an important milestone on the way to early and reliable diagnostics," judges Professor Rainer Leitgeb of the Medical University of Vienna, who is coordinating the European research project.

Whether specific biomarkers for Alzheimer's disease can be detected noninvasively in the retina is controversial in research. Some studies have identified protein deposits characteristic of the disease - amyloid plaques and tau fibrils - in both human retinas and mouse models. Others, however, report the absence of these clues and question the diagnostic value of the approach.

By using spectroscopic methods to distinguish healthy from diseased samples for the first time, the Jena researchers are now demonstrating a new way to detect Alzheimer's disease in retinas. "We biochemically characterized two defined mouse models," reports Clara Stiebing. In doing so, the researchers succeeded in biochemically identifying the individual layers of the retina on the basis of cross sections via their different contents of nucleic acids, rhodopsin, lipids and proteins. Using frontal images - which are closer to the intended in vivo application - they were able to distinguish healthy and diseased mouse retinas with an accuracy of 86 percent. Distinct clusters of amyloid plaques could not be found in either the cross sections or the frontal images.

The Jena research team had already shown in an earlier study that spectroscopic examinations of the retina - an eye scan using laser light - are theoretically possible and can provide valuable indications of disease.
Of course, one has to be careful about generalizing results from measurements in mice to humans as well, Rainer Leitgeb specifies. "However, the new results strengthen us in our specific goal of also being able to detect neurodegenerative diseases such as Alzheimer's by a simple eye scan. Even without the deposits of amyloid plaques, as previously assumed, there are changes in the retina that could potentially be detected by Raman spectroscopy. This would provide an objective and comparable diagnostic feature, which would also be of great importance for drug development. How specific these changes really are will ultimately have to be shown in the targeted human studies.

The partners at the Medical University of Vienna are now building a device that combines Raman spectroscopy with optical coherence tomography (OCT). Medical approval should be completed next month, reports Rainer Leitgeb. Once it is, the device can be tested on the first patients.