Quality control with CD177 can help save lots of time, efforts and money 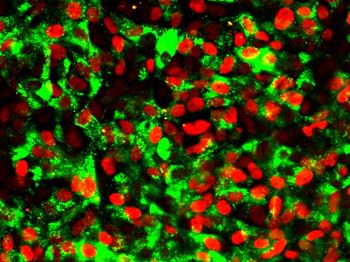 The loss of insulin-secreting beta cells by autoimmune destruction leads to type 1 diabetes. Clinical islet cell transplantation has the potential to cure diabetes, but donor pancreases are rare. In a new study, a group of researchers developed an improved pluripotent stem cell differentiation protocol to generate beta cells in vitro with superior glucose response and insulin secretion. This is a major step towards beta cell replacement therapy.

Human pluripotent stem cells (either human embryonic stem cells or induced pluripotent stem cells) can differentiate into every cell type of the human body with unlimited self-renewing capacity. Hence, pluripotent stem cells are an optimal source to generate specialized cell types for cell replacement therapy, e.g. beta cells for diabetic patients. However, current in vitro beta cell differentiation protocols are very complex due to the high number of differentiation steps. The process requires almost 20 signaling proteins and small molecules to regulate the growth and differentiation of the cells and lasts for more than four weeks. Within this multi-step process not all cells differentiate into the targeted cells but take wrong differentiation paths. This can lead to a highly heterogeneous cell population with beta cells which are not completely functional. A group of researchers at Helmholtz Zentrum München, the German Center for Diabetes Research (DZD), Technical University of Munich (TUM) and Miltenyi Biotec therefore tried to improve the quality of stem cell-derived beta cells.

The researchers developed an approach to enrich the stem cell culture with highly specialized pancreas progenitors which might lead to a more targeted differentiation into beta cells. “From developmental biology we knew that pancreatic progenitors are already specified at the endoderm stage – the first step of differentiation. We needed to find out if this was true also for human pluripotent stem cell differentiation,” explains Prof. Heiko Lickert, Director at the Institute of Diabetes and Regeneration Research at Helmholtz Zentrum München, Professor of Beta Cell Biology at TUM School of Medicine and member of the Research Coordination Board of the German Center for Diabetes Research (DZD).

To investigate on this, the researchers were looking for a possibility to better control the quality of the endoderm and its differentiation into specified pancreas progenitors. In a cooperation with Sebastian Knöbel’s group at Miltenyi Biotec they identified a monoclonal antibody called CD177 which marks a subpopulation of the endoderm that efficiently and homogenously differentiates into specified pancreatic progenitors. CD177 can therefore function as a quality control. “With CD177 we can already see at an early stage if the cells are on the right differentiation track. This can help save lots of time, efforts and money,” says Lickert.

Enriching the stem cell culture with CD177 at the endoderm stage increases the generation of specified pancreatic progenitors. Ultimately, this leads to more mature and more functional beta cells that respond better to glucose and show improved insulin secretion patterns.

Current beta cell differentiation protocols generate very heterogeneous cell populations that not only contain beta cells, but also remaining pancreatic progenitors or cell types from a different lineage. The purification by CD177 will not only improve the homogeneity and quality of the generated beta cells but also increase their clinical safety, as pluripotent stem cells are separated out. This is a crucial step towards the clinical translation of stem cell-derived beta cell replacement therapy for patients with type 1 diabetes.

Furthermore, as CD177 generated beta cells are more similar to beta cells in the human body, the CD177 protocol will help to establish disease modeling systems that can mimic the human pancreas. In addition, a differentiation protocol giving rise to functional beta cells is of highest interest for drug screening approaches.