The electrical charge is what makes the difference 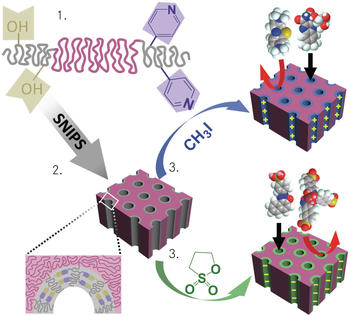 Figure: Diagram of membrane production: 1. Synthesis of the custom-made triblock terpolymer; 2. SNIPS: the functional groups of triblock terpolymer (-OH, C5H4N) position themselves precisely in the pores; 3. Post-functionalisation: after treatment with methyl iodide (CH3I) or 1,3-propane sultone ((CH2)3SO3), the nanochannelsare positively or negatively charged and allow organic molecules to pass selectively.

A new membrane developed at the Helmholtz-Zentrum Geesthacht (HZG) separates small dye particles or drug substances not only by size but also by their electrical charge. This additional function enables organic molecules with lateral dimensions of one to two nanometres to be such high-efficiently separated for the first time. HZG’s polymer researcher Zhenzhen Zhang has now presented her results in the journal Advanced Materials.

“Classic Blue” is the trending colour of the year 2020. The textile industry has long since adjusted its dyeing lines accordingly. To prevent dye residue from ending up in the wastewater, membrane technology provides an environmentally friendly way to safely remove harmful substances. Zhenzhen Zhang, a doctoral student at the HZG Institute of Polymer Research, has developed a new polymer membrane which is very promising for textile wastewater treatment: a so-called triblock terpolymer membrane that separates organic molecules from aqueous solutions according to their electrical charge.

“In my experiments with differently charged but comparably sized organic molecules I was able to demonstrate that the membrane reliably and very specifically separates dye molecules and other organic molecules, such as drug substances,” explains PhD student Zhenzhen Zhang.

The high level of selectivity of such tiny molecules also makes her new membrane interesting for the pharmaceutical industry: the extraction and purification of organic molecules is a very demanding task due to the small size of the molecules. The appearance of a new and reliable membrane means that costs of purification process could be cut here.

The new membranes are produced by the combination of self-assembly of block copolymers with the non-solvent induced phase separation, the so called SNIPS process developed at the HZG. For this, a triblock terpolymer is initially custom-made. Such a polymer chain consists of three blocks, where Zhang has added different functional groups to the two end blocks (see figure 1, beige (OH), purple (C5H4N).

The nanochannels in the membrane are then created with SNIPS: the triblock terpolymer solution is cast onto fleece, the solvent evaporates within a short time, and the fleece is immersed in a water bath. Small tubes with similar diameters are formed, which “grow” vertically downwards from the surface (figure 2.). The previously added functional groups arrange themselves within the tubes (figure 2.) and can receive a positive or negative charge by means of post-functionalisation(see figure 3). Methyl iodide (CH3I, blue) treatment provides the pores with a positive charge while 1,3-propane sultone ((CH2)3SO3, green) treatment provides the pores with a negative charge.

It was necessary to optimize a considerable number of parameters for the formation of an ordered separation layer. Only after countless experiments, in which she repeatedly altered parameters, e.g., evaporation time and solvent, Zhenzhen Zhang achieved the breakthrough in getting an isoporous membrane to show the desired properties.

Professor Volker Abetz, head of the HZG Institute of Polymer Research, explains: “Zhenzhen Zhang’s research has laid the groundwork that we will build on. The idea of providing the pores with a positive or negative charge opens up new application options in nanofiltration, e.g.for the chemical industry.”