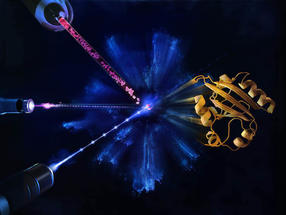 Artistic visualisation of a serial crystallography experiment. A stream of crystalline proteins are struck by an optical laser that initiates a reaction. Following a short delay the X-ray laser strikes the crystals. The information recorded about the arrangement of the atoms in the protein is used to reconstruct a model of the structure of the protein at different times of the reaction.

An international team of researchers has made the first film of the dynamics of a biomolecule at the European X-ray laser European XFEL. In a paper published in Nature Methods, scientists show how to effectively use the high X-ray pulse repetition rate of the European X-ray laser European XFEL to produce detailed molecular movies. This type of information can help us to better understand, for example, how a drug molecule reacts with proteins in a human cell, or how plant proteins store light energy. “This is a key advance in using the European XFEL for making molecular movies with high throughput,” said DESY scientist Anton Barty, a co-author of the paper.

Traditional structural biology methods use X-rays to produce snapshots of the 3D structure of molecules such as proteins. Although valuable, this information does not reveal details about the dynamics of biomolecular processes. If several snapshots can be taken in fast enough succession, however, these can be pasted together to make a so-called molecular movie. The high repetition rate of the extremely short X-ray pulses produced by the European XFEL makes it now possible to collect large amounts of data to produce movies with more frames than ever before. An international group of scientists have now worked out how to make optimal use of the European XFEL’s very high X-ray repetition rate to make these molecular movies at the facility in order to reveal unprecedented details of our world.

For these types of experiments, several instruments and components must be carefully aligned and their capabilities precisely understood. In Nature Methods the scientists present an experimental setup that makes the best use of valuable experiment time. They show how measurements can be taken close enough together to maximize the amount of data collected, while making sure that the sample being studied is not hit by anything but the intended laser pulse. “We have shown that we now know how to effectively and efficiently use the pulse structure of the European XFEL to make detailed molecular movies,” said Adrian Mancuso, European XFEL group leader at the instrument for Single Particles, Clusters, and Biomolecules and Serial Femtosecond Crystallography (SPB/SFX) where the study was done.

Marius Schmidt from the University of Wisconsin-Milwaukee in the USA who led the study said: “The extremely short and bright X-ray pulses produced by the European XFEL give us the possibility to study the smallest details of biological processes. Imagine a movie of a downhill ski race made up of only three frames. This will tell you something about how the race began and finished, and give you an image of the skier as well as a glimpse of the landscape somewhere on the mountain, but not much else. A movie containing many more frames, however, would follow the race in detail and would be much more informative. Now that we understand how to harness the European XFEL X-ray pulses to collect large amounts of data to produce detailed molecular movies, we are very excited to see what unimagined insights are now possible.”

The team at the SPB/SFX instrument are also able to adjust the parameters for each experiment depending on the protein being studied. These include changing the spot size of the optical light pulse to take into account the size of the individual protein crystals, and the time delay between optical and X-ray laser to accommodate the duration of the reaction being studied. “The knowledge and expertise we have acquired with these experiments at the European XFEL will enable scientists to use the SPB/SFX instrument to produce molecular movies of their sample,” said Mancuso.

For their experiments, the scientists studied a light-sensitive protein known as photoactive yellow protein (PYP). PYP is often used by scientists as a model system to evaluate new experimental setups. Results matched those obtained from data collected during previous experiments at other facilities, proving their setup was collecting valid data. They were also able to access a previously uncharted time range revealing novel details about parts of the biological reaction. “XFELs are uniquely equipped to make molecular movies of proteins in action at room temperature, such as done here,” concludes DESY Lead Scientist Henry Chapman, co-author of the paper.