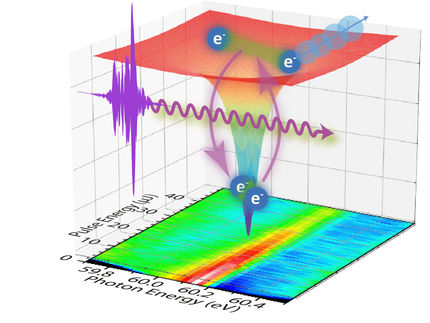 Schematic illustration for the powerful excitation of an electron pair (blue) in the helium atom by an intense ultrashort XUV laser pulse (violet).

In two experiments performed at the free-electron laser FLASH in Hamburg a cooperation led by physicists from the Heidelberg Max Planck Institute for Nuclear physics (MPIK) demonstrated strongly-driven nonlinear interaction of ultrashort extreme-ultraviolet (XUV) laser pulses with atoms and ions. The powerful excitation of an electron pair in helium was found to compete with the ultrafast decay, which temporarily may even lead to population inversion. Resonant transitions in doubly charged neon ions were shifted in energy, and observed by XUV-XUV pump-probe transient absorption spectroscopy.

An international team led by physicists from the MPIK reports on new results for efficient two-electron excitations in helium driven by strong and ultrashort extreme-ultraviolet (XUV) laser pulses [1]. Such doubly excited states are short-lived, decaying in just a few femtoseconds (10⁻¹⁵ seconds) via autoionization: one electron falls back into the ground state while the other one escapes from the atom. To achieve a significant population of this state, the rate of excitation has to be faster than the decay rate. It is like pumping water into a reservoir which has a significant leak.

This experiment has been performed at the Free-Electron Laser in Hamburg (FLASH), which delivers intense XUV laser pulses with a sufficiently short interaction time. Theoretical modelling predicts an efficient excitation of the electron pair by such pulses. Temporarily, the excited-state population may even exceed that of the ground state, creating a population inversion. This laser-controlled quantum dynamics with two active electrons manifests itself in a significant modification of the XUV light absorption, which has been observed in the experiment (see lower part of Figure).

In a second experiment at FLASH, the team around the Heidelberg physicists carried out XUV-pump XUV-probe transient absorption spectroscopy of doubly charged neon ions [2]. Here, the free-electron laser is used both for the production of the ions as well as for the spectroscopy. It reveals a nonlinear coherence spike on a few-femtosecond timescale which relates to the coherence time of a free-electron laser pulse. It thus represents a key step towards the implementation of two- and multidimensional spectroscopy approaches, even for statistically fluctuating free-electron lasers and gas-phase samples. The scientific key result of this experiment was the direct measurement of shifts of atomic energy levels induced by nonlinear interaction with the intense XUV laser.

Tuning the distortion of specific chemical elements within molecules could, in the future, revolutionize our way of thinking about chemistry.