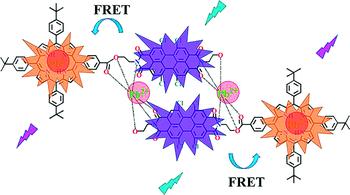 Environmental lead exposure is one of the most significant public health threats worldwide. Consequently, reliable, quick, inexpensive, and easy-to-handle lead assays are urgently needed. Scientists have now presented a novel chemosensor for lead. It offers a triplex signal upon binding of lead ions: a significant change in the solution color that enables naked-eye detection, and a ratio change in two absorption/fluorescence bands that allows for sensitive spectrometric lead analysis.

Lead is widely used in a multitude of fields, including rechargeable batteries, leaded gasoline, industrial applications, paints, and plumbing. Although leaded gasoline has been banned in many countries, and lead water pipes are no longer in use, lead is still a product of high economic importance. Lead is one of the most devastating, widespread environmental pollutants, especially in developing and threshold countries. Its extraction, use, and disposal contaminate the air, soil, and water, where it enters the food chain. At higher levels, it is lethal to adults; small children are affected by minor doses.

Scientists from the University of Jinan and the Jinan Academy of Agricultural Sciences (P. R. China) have now designed, synthesized, and characterized a novel chemosensor for lead detection. Their new approach allows for convenient naked-eye detection, as well as for sensitive spectrometric analysis of lead compounds.

The sensor is based on a molecule consisting of two building blocks: a macrocyclic porphyrin derivative and a large system of condensed aromatic rings with a central perylene unit. In the presence of lead, a complex is formed with two lead ions and two sensor molecules. This induces a significant change in the solution color: With increasing concentrations of lead, the color changes from baby pink to light green. The chemosensor shows a clear linear relationship between the absorbance and the concentration of lead ions.

In addition, the system undergoes large changes in the intensity ratio of two absorption and two emission peaks, which allows for the ratiometric detection of lead ions with excellent sensitivity (detection limit: 4.0×10-7 mol/l).

Upon the binding of lead ions to the sensor molecules, the emission of the porphyrin moiety is substantially quenched. Also, the absorption bands are shifted to longer wavelengths relative to those of the free porphyrin base. This enables a nonradiative transfer of excitation energy from the donor perylene moiety to the acceptor porphyrin. The porphyrin moiety emits the energy as light, generating a fluorescence band that is not observed in solutions of the free sensor molecules.

Tests with other metal ions proved that the novel sensor is highly selective for lead. The team, led by Peihua Zhu, is confident that it offers a way for on-site and real-time detection of lead ions in real systems. In addition, it could be a starting point for the development of further sensors based on the same principle.