How reliable is diagnostic testing for Zika? 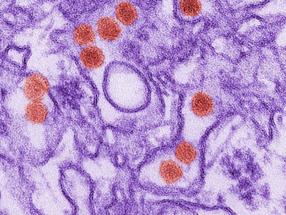 Globally, Brazil has been the hardest hit by the current Zika outbreak. Almost all cases of Zika-associated malformations in newborns have been reported from this country. DZIF scientists from the Charité – Universitätsmedizin Berlin have shown that molecular diagnostic tests for the Zika virus in Brazil are not always reliable. Almost two thirds of all laboratories showed false-positive or false-negative results.

In 2016, the Zika virus spread in Brazil, affecting millions of people. A particular cause for concern was the increasing number of cases of brain malformations in newborns (microcephaly). Meanwhile, a link with the Zika virus has been confirmed. Reliable diagnostics for Zika virus infections remain a priority concern, to which DZIF scientists dedicated themselves.

“We need reliable laboratory diagnostics, particularly in outbreak regions like Brazil for two reasons,” explains Prof Felix Drexler, who conducts Zika research at the Charité in Berlin. On the one hand, patients must be able to rely on the tests as wrong results could have fatal consequences. According to Drexler, “We know, for instance, that the demand for illegal abortions in Latin America increased by almost 100 percent during the Zika outbreak.” Reliable diagnostics could help to prevent such dramatic measures. On the other hand, preventive measures in healthcare systems and further research depend on the availability of reliable risk assessments.

Currently, acute infections are predominantly confirmed by detecting viral nucleic acid in blood and urine. All tests detect viral RNA (ribonucleic acid) by means of the so-called polymerase chain reaction (PCR) which is a standard method for detecting nucleic acids. However, how reliably do these tests detect the Zika virus, i.e. do they also detect viral RNA in very low virus concentrations? Are infections with the virus always detected? These questions constituted central issues in an external quality assessment conducted by Drexler and his team together with Brazilian scientists at 15 laboratories in Brazil in 2017.

15 laboratories in seven Brazilian states participated in the study. The most severely affected regions of the country were included. Each laboratory received twelve precisely defined samples that were to be investigated by means of the standard PCR methods used in the laboratory. The contents of the individual samples were unknown to the participating laboratories. Zika-positive and Zika-negative samples were included as well as samples that contained related viruses that cause, for example, dengue fever or yellow fever, in order to test the specificity of the results.

“We observed both false-positive and false-negative results in some of the laboratories,” Drexler briefly summarises the results. More precisely: approximately a third of the laboratories attained perfect results whereas approximately two thirds of the laboratories demonstrated partially incorrect results. False-negative results showed insufficient test sensitivity, as they were unable to detect the existing viruses. Additionally, false-positive results occurred, suggesting contaminations or wrong handling of the tests. The scientists deem false-positive tests to be particularly critical as they may erroneously report infections in women. Additionally, viral load estimations, i.e. the amount of viral RNA in the blood or urine, showed very different results across the different laboratories.

In conclusion, with regard to diagnostics, some of the participating laboratories urgently require improvements. “However, it must be said that assessments of Zika diagnostics in European laboratories demonstrated similar results, highlighting that Zika diagnostics is generally challenging” emphasizes Drexler. He considers further investments in reliable diagnostics essential. Renewed investigations have already been scheduled together with laboratory directors from the study with the aim of optimising processes. Beyond this, the scientists also recommend combining of molecular with serological tests which determine infection by detecting the antibodies developed by an infected person a few days after the infection. Molecular methods remain the method of choice for early virus detection when first symptoms of the disease occur. “We need continuous global quality control for Zika virus diagnostics,” emphasizes Drexler.