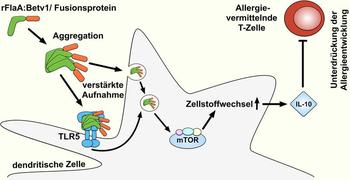 The fusion protein rFlaA:Betv1 suppresses allergic reactions via an mTOR-mediated activation of the cell metabolism, which leads to the production of the anti-inflammatory cytokine IL-10.

Fusion proteins consisting of antigens and the bacterial adjuvant flagellin are promising vaccine candidates. They have the potential to induce immune responses in a targeted and reliable manner, thus conveying protection against infectious diseases. In addition, they can favourably influence misdirected immune reactions, for example as part of a treatment against allergies. Researchers from the Paul-Ehrlich-Institut have now clarified the mode of action of such a candidate for the treatment of birch pollen allergies.

The protein flagellin is a promising adjuvant. Flagellin is a major component of spiral-shaped protein filaments on the surface of certain bacteria – so-called flagella. They serve the mobility of freely floating bacteria. Flagellin is recognised by the toll-like receptor 5 (TLR5). TLR5 belongs to a group of “pattern recognition receptors”, which, among other things, can be found on cells of the innate immune system. They recognise pathogens on the basis of their unique molecular patterns, which helps them induce immune responses reliably.

Researchers from the Paul-Ehrlich-Institut under the supervision of Dr Stefan Schülke, Research Group Molecular Allergology of the Vice President of the Paul-Ehrlich-Institut, Professor Stefan Vieths, jointly with researchers from Mainz, Essen, and Vienna, have now succeeded in describing the mechanism of action of such a fusion protein in more detail for the first time. For this purpose, Dr Schülke and colleagues examined a fusion protein developed by them consisting of flagellin A (from listeria) and the major allergen of birch pollen (Bet v 1).

Contrary to the protection from infectious diseases, the aim of a “vaccination” with allergens, which for instance cause hay fever, is to stimulate the immune system to bring about tolerance against the allergen. After the researchers were in a position to show that their fusion protein – however, not the mixture of both single proteins – was able to prevent the development of allergic reactions in the mouse model efficiently, they examined the mechanism of action of their fusion protein. Preliminary research work had already suggested that the observed suppression of allergic reactions after immunisation with the fusion protein is caused by the release of the immune messenger interleukin-10 (IL-10). IL-10 is an autologous cytokine. Its function is to reduce overreaching immune responses.

Based on complex immunological tests, the researchers established that dendritic cells incorporated the fusion protein, which was present as aggregates, much better than the non-fused mixture of the two single proteins. Dendritic cells are important immune cells for the induction of immune responses. In these cells, stimulation with the fusion protein led to a very strong activation of these cells, which subsequently released both pro-inflammatory and anti-inflammatory cytokines.

In additional experiments, the research team was able to show that an enhanced activation of the cell metabolism occurred in dendritic cells which were stimulated with the fusion protein. This condition of an increased metabolic activity, the so-called Warburg effect, was caused by the activation of the mTOR1-complex. The mTOR1-complex is a central regulator of metabolic activity in all body cells and is also important for the induction of immune responses.

To examine the role for the mTOR1-complex in the cytokine release induced by the fusion protein, the researchers treated dendritic cells with rapamycin, a specific inhibitor of mTOR1 activation. While the release of the anti-inflammatory cytokine IL-10 could be inhibited by rapamycin, the production of pro-inflammatory cytokines remained unaffected by this treatment. Taken together, these results show that the production of IL-10 conveyed by the fusion protein was caused by the activation of the cell metabolism in the dendritic cells.

“This result, which is surprising for us, for the first time shows that the immune modulating activity of a flagellin-containing vaccine candidate can be mediated by an activation of the cell metabolism. This knowledge can contribute to a better understanding of the complex immunological processes that occur during the use of such vaccine candidates and can support the development of new vaccine candidates”, as Dr Schülke explained the relevance of the results.