Why is Usain Bolt the fastest person on Earth?

Researchers observe muscles at work with the help of new microscopes 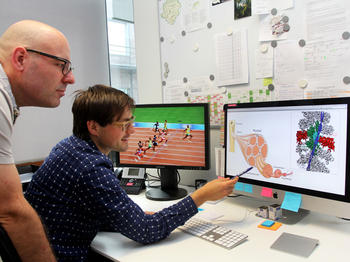 Twenty metres before the finish line Usain Bolt already opens his arms in triumph and ramps up his speed: even with his “handbrake” on, at 9.58 seconds, he runs the 100 metre stretch faster than anyone ever before in 2009 in Berlin. In the process, he reached a maximum speed of almost 45 kilometres per hour. Records like this could well be broken again in the forthcoming Olympics in Rio de Janeiro. One of the factors that contributes to such athletic prowess is the structure of muscle cells. Scientists from the Max Planck Institute of Molecular Physiology in Dortmund analyzed muscle proteins and observed the molecules at work at a previously unattained level of detail. Cryo-electron microscopy, a technique they have further developed, can be used to explain the cause of muscle diseases – and to identify features that make the musculature of top athletes so efficient.

Why can some people run so much faster than others? A tissue sample from the world record holder could enable researchers from the Max Planck Institute in Dortmund to answer this question. Stefan Raunser and his research team have succeeded in resolving the interaction between key proteins in muscle contraction at high details. “With cryo-electron microscopy we can observe the natural changes in the interplay of muscle proteins. It would also enable us to discover whether this interplay differs in Usain Bolt’s muscles from that in other people’s muscles,” explains Raunser, Head of the Department of Structural Biochemistry at the Max Planck Institute of Molecular Physiology.

Special protein constellations could consequently result in the optimal development of muscle strength, which is not achieved in other sprinters. “All top athletes probably have genes that enable them to achieve top performances,” says Raunser. In addition, given that skeletal muscle contains both fast muscle fibres capable of rapid bursts of power and slow ones that are suitable for enduring activity, Bolt’s musculature may be composed of a particularly effective combination of fibres.

Muscle power thanks to actin and myosin

The protagonists of muscle movement are the protein actin, which accounts for 20 percent of the weight of the musculature, and the motor protein myosin, which converts chemical energy into actual movement. The actin forms long thread-like fibres: “The actin uses myosin molecules like a track,” explains Julian von der Ecken, a doctoral student in Stefan Raunser’s Group. “When several million myosin molecules move along this track simultaneously, the muscle contracts.”

With genetic muscle diseases, the actin and myosin no longer work adequately together and the musculature is weakened as a result. It is not known why the proteins interact less effectively with each other in such cases, as it was not possible for scientists to study the proteins at the necessary level of detail up to now. Raunser’s team has made an important contribution to improving the understanding of these muscle diseases. They were able to show, for example, that many genetically induced changes are located in a critical area which plays an essential role in the formation of the interface between the muscle proteins. Changes in this interface could also make the actin and myosin molecules interact particularly effective in Usain Bolt and other elite athletes, and lead to a greater efficiency of the musculature as a result.

“We are in the very early stages of our research, as muscle contraction is a process that unfolds extremely rapidly. For this reason, we have to subdivide the entire process into numerous individual stages. Nevertheless, our findings could be used as a basis for research on new drugs,” says Raunser.