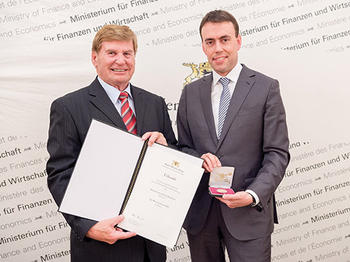 As part of the annual awards ceremony for the Lifetime Business Achievement Medal of Honor event, the Secretary of State for Trade and Industry Nils Shmid presented Gerhard Juchheim with the Lifetime Business Achievement Medal of Honor for 2015 from the state of Baden-Württemberg. Since 1978 this award has been bestowed on leaders and companies for their outstanding professional and entrepreneurial achievements. Gerhard Juchheim was honored for his lifetime business contribution in Baden-Württemberg by Mr. Schmid in the famous marble ballroom of the Neuen Schloss (New Castle) in Stuttgart. It was an honor not only for Gerhard Juchheim but also for the long-standing historical tradition of this family company.

The success story began in former Eastern Germany (DDR), where Gerhard Juchheim´s father Ernst Juchheim invented the first glass contact thermometer and later registered it in 1926. Ernst Juchheim´s big breakthrough came along after his second patent in 1936. In 1952, at 50 years old, Ernst Juchheim fled East Germany, leaving behind the company and all the family assets he works so hard to build. After brining over his family via West Berlin, he started anew in Solingen with Heju GmbH which would later be called JUCHHEIM KG.

At the young age of 19 and directly after his apprenticeship, Gerhard Juchheim started working in the family company and successfully improved and expanded it. During that time, he developed his own vision to create and produce his own laboratory thermostats and slowly realized that Solingen was not the right place to accomplish this goal. So in 1967 with a lot of entrepreneurial courage, Mr. Juchheim decided to move and set-up a new company in the small Black Forest town of Seelbach which would be called Juchheim Labortechnik KG. With this move, his vision became a reality. The number of employees grew from year to year and the economic setbacks only motivated Mr. Juchheim to develop more innovative thermostats. In 1980, the company took over the brand name JULABO as a part of the registered company name JULABO Labortechnik GmbH. Mr. Juchheim´s company continues to successfully grow today with more than 400 employees worldwide and over 300 at the headquarters in Seelbach alone.

Gerhard Juchheim is honored to accept this recognition for his lifetime achievement which he has successfully handed over to his two sons Markus and Ralph Juchheim. Seelbach´s Mayor Thomas Schäfer, as well as Markus and Jennifer Juchheim joined Mr. Juchheim in Stuttgart to accept his much deserved award.