New facility in France to measure fundamental properties of neutrinos 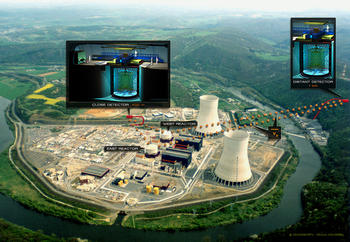 The Double Chooz collaboration recently completed its neutrino detector which will see anti-neutrinos coming from the Chooz nuclear power plant in the French Ardennes. The experiment is now ready to start collecting data in order to measure fundamental neutrino properties with important consequences for particle and astro-particle physics.

Neutrinos are electrically neutral elementary particles, three of a kind plus their antiparticles. Though already postulated in 1930 their first experimental observation was made in 1956. Because of their weak interaction with other particles, matter is almost completely transparent to neutrinos and large sensitive detectors are needed to capture them.

Neutrino oscillations were a major discovery in the late 1990s with the corresponding experiments being included in the 2002 Nobel Prize. Oscillations describe in-flight transformations of different neutrino species into each other and the observation of this effect implies that neutrinos do have mass. The oscillations depend on three mixing parameters, of which two are large and have already been measured. The third one is called theta13 and is known to be smaller with an upper limit coming from a previous experiment at Chooz. The new Double Chooz detector is the first of a new generation of reactor neutrino experiments with the aim of measuring this fundamental parameter in neutrino physics which is a key area of particle physics research. The results will also have important consequences for the feasibility of future neutrino facilities which will aim for even more precise measurements.

Double Chooz consists of two identical detectors. The first one, at a distance of about 1km from the reactor cores, has now been filled and started to collect data. The number of neutrinos measured compared to the expected flux from the reactors will allow considerably improvement in the sensitivity for theta13 already in 2011. The second detector, located at a distance of 400 metres, will start operating in 2012. At this distance no significant transformation into another neutrino species is expected. By comparing the results from both detectors, theta13 can be determined with even higher precision.

Both detectors use an organic liquid scintillator, which was developed specifically for this experiment. The neutrino target in the core of the detector consists of 10 cubic metres of Gadolinium doped scintillator which can be used to tag neutrons from inverse beta decays which are induced by anti-neutrinos emitted by the reactors. The target is surrounded by three layers of other liquids in order to protect against other particles and to dampen environmental radioactivity. These liquids are contained in very thin vessels so as to minimize inactive volumes inside the detector. The target is observed by 390 immersed photomultipliers which convert the interactions into electrical signals. These signals are processed in a data acquisition system which can collect data over the next five years. The new detectors will ensure that neutrino physics will stay one the most fruitful areas of particle physics, as it has been for the past 50 years.

An essential contribution to the project was the development of the gadolinium-doped liquid scintillator by the researchers at the Max Planck Institute for Nuclear Physics in Heidelberg. Their task was to find, test, produce and purify a gadolinium compound which is solvable in an organic liquid and chemically stable for many years. In collaboration with their colleagues from Japan they checked the photomultipliers in a specially built test-bed. These central contributions will also play a crucial role for the interpretation and data analysis. Universities and research institutes from Brazil, England, France, Germany, Japan, Russia, Spain and USA comprise the Double Chooz collaboration.