A nanokelvin microwave refrigerator for molecules 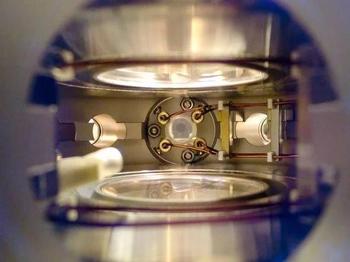 A deep view into the main vacuum chamber of the NaK molecule experiment. In the center, four high-voltage copper wires are led to an ultrahigh-vacuum glass cuvette in which the ultracold polar molecules were generated. 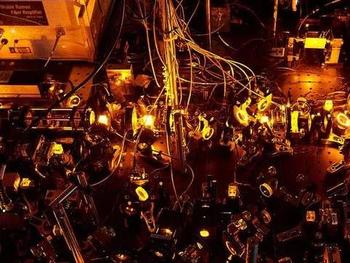 Researchers at the Max Planck Institute of Quantum Optics have developed a novel cooling technique for molecular gases that allows polar molecules to be cooled down to a few nanokelvin. The trick used by the team in Garching to overcome this hurdle is based on a rotating microwave field. It helps stabilize the collisions between the molecules during cooling by providing an energetic shield. In this way, the Max Planck researchers succeeded in cooling a gas of sodium-potassium molecules to 21 billionths of a degree above absolute zero. In doing so, they set a new low-temperature record. In the future, the new technique will make it possible to create and study many forms of quantum matter that were previously inaccessible experimentally.

When a highly diluted gas is cooled to extremely low temperatures, bizarre properties are revealed. For example, some gases form a so-called Bose-Einstein condensate - a type of matter in which all atoms move in unison. Another example is suprasolidity: a state in which matter behaves like a frictionless fluid with a periodic structure. Physicists expect particularly manifold and revealing forms of quantum matter when cooling gases composed of polar molecules. They are characterized by a non-uniform electric charge distribution. Unlike free atoms, they can rotate, vibrate, and attract or repel each other. However, it is difficult to cool molecular gases to ultra-low temperatures.

A team of researchers at the Max Planck Institute of Quantum Optics in Garching has now created a simple and effective way to remove this obstacle. It is based on a rotating field of microwaves.

For their experiments, the researchers used a gas of sodium-potassium (NaK) molecules trapped in an optical trap by laser light. To cool the gas, the team relied on a method that has long been used to cool unbound atoms: evaporative cooling. "This method works on a principle similar to what we know from a cup of hot coffee," says Xin-Yu Luo, head of the Laboratory for Ultracold Polar Molecules in the Department of Quantum Many-Body Systems at the Max Planck Institute of Quantum Optics: in coffee, water molecules are constantly colliding and exchanging some of their kinetic energy. If two particularly energetic molecules collide, one of them can become fast enough to escape the coffee - it steams out of the cup. The other molecule is left behind with less energy. Thus, the coffee gradually cools. In the same way, a gas can be cooled down to a few nanokelvin - billionths of a degree above absolute zero at minus 273.15 degrees Celsius.

However, "If the gas consists of molecules, they have to be additionally stabilized at very low temperatures," Luo says. The reason lies in the much more complex structure of molecules compared to unbound atoms. This makes it difficult to control their movements during collisions. The molecules can become entangled in each other during collisions. In the case of polar molecules, there's also the fact that "they behave like tiny magnets and - like them - can bake together, causing them to be lost to the experiment," explains Andreas Schindewolf, a researcher on Xin-Yu Luo's team. These difficulties have proven to be a huge obstacle to research in recent years.

Microwaves keep the molecules at a distance

To remove the obstacle, the Garching researchers relied on a trick: the additional application of a specially prepared electromagnetic field that serves as an energetic shield for the molecules - preventing them from becoming entangled and clumping together. "We realized this energy shield using a strong, rotating microwave field," explains Andreas Schindewolf. "The field causes the molecules to rotate at a higher frequency." Therefore, if two molecules come too close to each other, they can exchange kinetic energy - but at the same time they align themselves with each other in such a way that they repel and quickly move away from each other again.

To create a microwave field with the required properties, the researchers placed a helical antenna under the optical trap containing the gas of sodium-potassium molecules. "This reduced the rate at which the molecules became entangled by more than an order of magnitude," reports Xin-Yu Luo. In addition, under the influence of the field, a strong and long-range electrical interaction developed between the molecules. "As a result, they collided much more frequently than without the rotating microwave field - on average about 500 times per molecule," says the physicist. "That was enough to cool the gas to close to absolute zero through the evaporation effect."

After just a third of a second, the temperature reached around 21 nanokelvin - well below the critical "Fermi temperature." It marks the limit above which quantum effects determine the behavior of a gas - and bizarre phenomena begin to make themselves felt. "The temperature we have reached is the lowest so far in a gas of polar molecules," Luo is pleased to say. And the Max Planck researcher is convinced that technical refinements to the experimental setup will allow them to reach even much lower temperatures.

The results could have far-reaching implications for research on quantum effects and quantum matter. "Since the new cooling technique is so simple that it can also be integrated into most experimental setups with ultracold polar molecules, the method should soon find widespread application - and contribute to quite a few new insights," says Immanuel Bloch, director of the Department of Quantum Many-Body Systems. "Because cooling by microwave field not only opens up a range of new investigations into peculiar states of matter such as superfluidity or suprasolidity," Bloch says. "Moreover, it could be useful in quantum technologies." For example, in quantum computers, where data could perhaps be stored by ultracold molecules. "For researchers working on ultracold polar molecules, these are truly exciting times," enthuses Xin-Yu Luo.