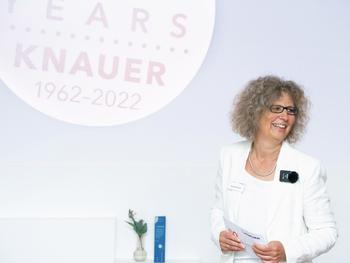 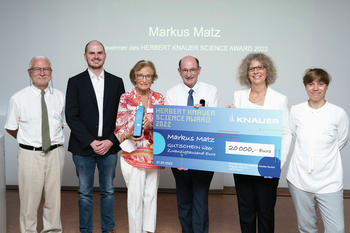 The Berlin-based manufacturer of high-tech laboratory measuring instruments KNAUER Wissenschaftliche Geräte GmbH celebrated its sixtieth company anniversary with a big party on July 1, 2022 under the motto "Science with Passion". For this occasion, the company had invited about 100 guests from science, politics, and business to celebrate together the long-standing business success. Maren Schellenberg, district mayor for Steglitz/Zehlendorf (Green party) was also present.

After an introductory welcome by Managing Director Alexandra Knauer, Tino Schopf (SPD), State Secretary for Energy and Operations at the Berlin Senate Department for Economics, Energy and Operations, paid tribute to the company's 60th anniversary: "For decades, KNAUER has been an integral and important part of Berlin as a location for business and innovation. When equipment for encapsulating mRNA was urgently needed in the course of vaccine production against the Corona virus, KNAUER developed and manufactured it in record time together with a pharmaceutical company. An impressive achievement with which the company has made a major contribution in the fight against the pandemic. I am very pleased to join in celebrating the 60th anniversary of this outstanding Berlin-based family business. For the future, I wish continued success to the company and its 170 employees and look forward to the coming innovative developments and KNAUER products from Berlin for the world."

KNAUER is best known for its liquid chromatography (LC) systems and components. LC is one of the most versatile and gentle separation methods for molecules. Many laboratories around the world use it for analytical purposes for sensitive determination of, among other things, trace components in food or pollutants in environmental samples. At least as important is its use for the purification of, for example, active pharmaceutical ingredients, natural products and other valuable substances. KNAUER has been in the market with liquid chromatography instruments since 1973 and has built up considerable expertise. It has been the company's mainstay for over forty years.

More recently, the company has gained notoriety for manufacturing the production equipment that successfully encapsulated lipid nanoparticles for Corona mRNA vaccines on a large scale. KNAUER has received several innovation awards for this technical innovation, most recently the German Innovation Award presented by WirtschaftsWoche business magazine at the end of April 2022. The presentations by KNAUER and a guest speaker from BioNtech were also dedicated to this current topic.

Under the somewhat provocative headline "Sustainability is not a trend", the Head of the Quality and Laboratory Department Dr. Kate Monks presented in an entertaining manner how significant the topic is for the family business.

The next item on the program of the festive event was eagerly awaited. The winner of the "Herbert Knauer Science Award 2022" was to be announced. In her introductory speech, Roswitha Knauer, who founded the company in 1962 with her husband Dr. Herbert Knauer, noted that innovation has always been at the heart of their company's success. Therefore, she said, KNAUER awards the prize to promote innovative solutions in the field of liquid chromatography. In addition to a trophy, the winning entry will receive a voucher for scientific equipment from KNAUER worth twenty thousand euros.

An expert jury headed by "chromatography pope" and technical book author Dr. Stavros Kromidas, who also presented an introductory keynote speech on liquid chromatography, had selected a winner from among the submissions. The choice fell on Markus Matz, a 28-year-old doctoral candidate working at the Institute of Chemical Technology and Polymer Chemistry (ITCP) at the Karlsruhe Institute of Technology (KIT). His award-winning project deals with nuclear magnetic resonance (NMR) as a detection method for liquid chromatography, which reveals highly detailed information about the separated molecules. His innovation significantly improves the resolution of the benchtop NMR instrument used and is a step in the direction of making NMR detection more tangible for standard laboratories.