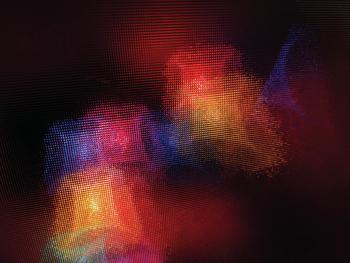 Scientists from Trinity College Dublin have taken inspiration from nature to create luminescent, self-healing gels with a suite of potential applications ranging from bank note counterfeiting to next-gen bio-sensing and imaging.

Crucially, the scientists have been able to introduce guanosine (a molecule that plays many important metabolic roles in our cells) into these gels, and add other molecules that can do exciting things from a materials and biological sciences perspective. One such addition to these gels is that of lanthanide ions, which possess unique properties including luminescence, magnetism and the ability to speed up specific reactions. The study was published in the recent edition of the Cell Press journal Chem.

Guanosine gels exhibit chirality (left-handed helicity in this case) and the scientists focused on transferring that characteristic to the lanthanide elements of the gels once those ions had been added.

Although that may seem like just one more simple step in the chemical recipe, it is a leap that opens doors to a multitude of new applications as it means these gels can accurately signal varying intensities of whatever they are designed to sense.

From a medical perspective that could mean accurately detecting the presence—and amount—of a biomarker of interest, for example. But the possibilities are so plentiful that the team must now take time to assess which direction to take their research next.

Oxana Kotova, Research Fellow in Trinity’s School of Chemistry and AMBER, the SFI Centre for Advanced Materials and BioEngineering Research, is first author of the published study.

Dr Kotova, who is based in the School of Chemistry, located in the Trinity Biomedical Sciences Institute (TBSI), said: “We are interested in developing supramolecular hydrogels like this as they open so many doors to new applications in various fields from biological to material sciences. By transferring chirality onto the lanthanide elements of this gel, we have been able to modify the chiral luminescence response of the latter, which can aid future understanding of recently discovered lanthanide biological functions as well as help the development of future generation sensors and imaging agents. We think it is fascinating that such options arise from a new material that was itself created by taking inspiration from biology.”

Thorfinnur Gunnlaugsson, Professor of Chemistry in Trinity’s School of Chemistry and AMBER, and based in TBSI, is the senior author of the research article. He added: “The idea that Oxana had here was to use bio-inspired DNA building blocks to generate luminescent responsive soft-material that not only is emissive under light irradiation, but also self-healing, which itself can lead to various applications, such as in responsive ink printing. Furthermore, the material presented in this Chem article, gives rise to the chiral-based emission upon irradiation of visible light. This means that using a technique called circular polarised luminescence (CPL), we can observe either the ‘right or the left handed’ (e.g. the polarised) emission from the material. The use of this spectroscopic technique is fast becoming apparent and its use in chemical and biological research is finding its niche. This has significant consequences for the potential applications of lanthanide based bio-inspired soft material, such as for monitoring biological processes, in live cellular imaging, and in drug delivery, to name just a few. The CPL technique is also important means of developing ‘responsive’ counterfeiting inks for use in printing of bank notes, labels, etc. Hence, the opportunities here are vast for future developments, and we are excited to be part of this important finding, which was only made possible with the coming together of leading research groups with strong expertise.”