Lung Tissue from the Lab

Organoids could be used in diagnosis, drug development, and fundamental research 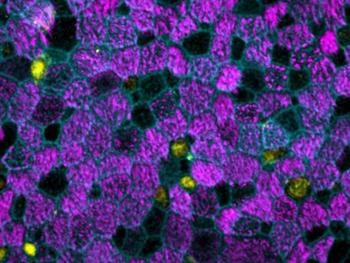 Laboratory studies of lung tissue usually require the removal of large amounts of human or animal tissue. Now scientists from the University of Freiburg’s Faculty of Medicine have succeeded in collaboration with American researchers in generating tiny quantities of lung tissue, so-called organoids, from just a few body cells in the lab. The tissue forms a three-dimensional structure as it develops, complete with the tiny hairs on the surface typical of lung tissue. These organoids can play an important part in future research on lung diseases, drug development, or personalized medicine. The researchers published their method in the online version of the  American Journal of Physiology.

“The method we developed for growing lung tissue is simple and inexpensive and is very good at reproducing important biological aspects,” says the Freiburg lead investigator Dr. Peter Walentek, Emmy Noether research group leader at the University of Freiburg’s Faculty of Medicine and scientist at the Medical Center – University of Freiburg. In addition, he is a member of the University of Freiburg’s Cluster of Excellence Centre for Integrative Biological Signalling Studies. The study was headed by scientists at the University of California in San Francisco, USA, in close collaboration with the Freiburg researchers. They combined lung cells with two messengers after two weeks of cultivation in the laboratory, whereupon the stem cells were positively influenced and the organoids formed. Until now, this process involved many steps. For example, cells that had been removed first had to be brought into an embryo-like state by means of complicated methods. Furthermore, until now the outside of the tissue in such organoids was always directed inward and was much less like the natural model.

Cells from patients with the lung disease cystic fibrosis led to the development of characteristically altered organoids in the lab. “In the future, this uncomplicated method might even allow us to grow the tissue of individual lung patients in the lab, in order to hopefully test in advance whether a therapy is effective or not,” says Walentek. In addition, the scientists can use the organoid to study how healthy lung tissue develops and precisely how genetic changes affect, for example, the formation of the tiny hair-like structures known as cilia. “The malformation of these cilia leads not only to lung diseases but also, among other things, to genetic kidney diseases, which we are investigating at the Collaborative Research Center NephGen (SFB1453),” says Walentek.

Until now, the healthy development of lung tissue and genetic lung diseases were often studied in animal models. The newly established method should be able to replace some of these studies: “Growing tissue in its natural three-dimensional form in the lab is an important way to reduce the use of animals in research. This is another reason why this research is so important,” says Prof. Dr. Lutz Hein, Dean of the University of Freiburg Faculty of Medicine.