New State of Matter: Crystalline and Flowing at the Same Time 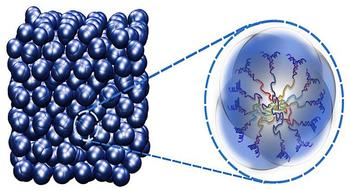 Cluster crystals consist of a core of organic polymers surrounded by DNA molecules (right). Pressed together (left), they exhibit properties of crystals and liquids at the same time.

The predictions of researchers that certain particles of matter with sufficiently high density would form a new state - crystalline and flowing at the same time - could be confirmed in the laboratory.

More than 20 years ago, researchers predicted that with sufficiently high density certain particles of matter would form a new state of matter that features the properties of both crystalline solids and flowing liquids. Scientists from Forschungszentrum Jülich, the University of Siegen, and the University of Vienna have now succeeded in creating this state in a laboratory.  Their experimental concept opens up the possibility for further development and could pave the way for further discoveries in the world of complex states of matter.

Through their research efforts, the team was able to finally disprove an intuitive assumption that in order for two particles of matter to merge and form larger units (i.e. aggregates or clusters), they must be attracted to each other. As early as the turn of the century, a team of soft matter physicists headed by Christos Likos of the University of Vienna predicted on the basis of theoretical considerations that this does not necessarily have to be the case. They suggested that purely repulsive particles could also form clusters, provided they are fully overlapping and that their repulsion fulfils certain mathematical criteria.

Since then, further theoretical and computational work has demonstrated that if compressed under external pressure, such clusters develop crystalline order in a way similar to conventional materials such as copper and aluminium. Put simply, a crystalline order signifies a periodic lattice structure in which all particles have fixed positions. In contrast to metals, however, the particles that form cluster crystals are highly mobile and continuously jump from one lattice site to the next. This gives these solids properties that are similar to liquids. Each particle will at some point be found at each lattice site.

It proved difficult to produce particles that had the necessary characteristics for the detection of cluster crystals. However, Emmanuel Stiakakis from Forschungszentrum Jülich and his colleagues have now succeeded in achieving this aim in close collaboration with theoreticians from Vienna and polymer chemists from Siegen. The researchers were able to produce hybrid particles with a pompom-like structure. The core of these particles is comprised of organic polymers to which DNA molecules are attached and which stick out in all directions like the threads of a pompom. This structure enables the molecules to be pushed far inside each other and thus to be sufficiently compressed. At the same time, the combination of an electrostatic repulsion of naturally charged DNA components and a weak interaction of polymers at the centre of the constructs ensures the necessary overall interaction.

"DNA is particularly well suited for our intentions, as it can be assembled relatively easily in the desired shape and size due to the Watson–Crick base pairing mechanism. In combination with polymer cores, the shape and repulsion of the hybrid particles can be fine-tuned and different variations can be produced relatively quickly," explains Stiakakis, who conducts research at Forschungszentrum Jülich’s Institute of Biological Information Processing. The physicist with a PhD in the field of physical chemistry has long been using these helix molecules to investigate aspects of self-assembling soft matter.

"After extensive efforts and by applying numerous experimental methods, including biochemical synthesis and characterization as well as X-ray scattering and light scattering, we have now been able to bring a more than 20-year search for cluster crystals to a successful conclusion," says a delighted Likos. The theoretical physicist at the University of Vienna’'s Faculty of Physics now anticipates the discovery of further complex states of matter, which will be formed by the new macromolecular aggregates.