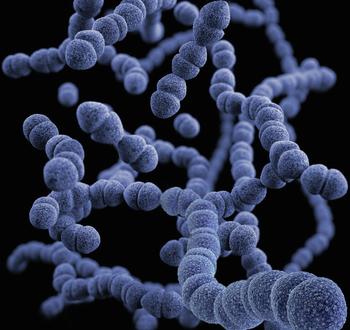 Photo by CDC on Unsplash

Scientists have revealed how bacteria make tiny liquid droplets from proteins to help them survive harsh environments and thus reduce their chances of being killed by antibiotics.

The study reveals how aggresomes – miniscule liquid droplets assembled from several different proteins – form in response to increasing the stress experienced by bacteria, and that these bacteria can form aggresomes that are more successful at surviving these stresses.

The research team, jointly led by scientists at the University of York and Peking University, discovered that environmental stresses were linked to reducing the level of a chemical called ATP – known as the “universal currency of cell energy” – inside bacteria. It is thought that this reduction may affect the solubility of key cellular proteins that encouraged them to assemble into droplets.

The study may help solve the mystery of how certain types of bacteria can both survive extended treatments of antibiotics, and, through mutating their genes, increase the likelihood of forming complete resistance against antibiotics.

By using advanced optical microscopy and computational modelling, the researchers showed that droplet formation is explained by the physics of “liquid-liquid phase separation”.

Scientists say the forces of attraction between molecules in solution drive them together to form semi-stable assemblies that have interesting liquid properties, and, in the case of aggresomes, comprise up to several hundred molecules of different proteins. Molecules within an aggresome remain free to move as in any liquid, and turnover with other molecules outside an aggresome.

By assembling proteins into droplets that are essential to core cellular processes, bacteria efficiently stores them away during stress while the cell shuts down, keeping them safe for when the harmful environment recedes while helping the cell to recover again.

Co-lead author of the study, Professor Mark Leake, from the Department of Physics and Department of Biology at the University of York, said: “Our study shows that aggresomes in bacteria are highly dynamic structures; they are what we would describe as ‘cell organelles’, but they lack the sort of membrane on the outside that we would usually find in better-studied organelles, such as the nucleus inside our own cells.

“Relying on more fixed structures like membrane-bound organelles is too slow: they don’t allow bacteria to respond fast enough to a rapidly changing environment since it takes time to make and break a membrane and to select which molecular components are allowed to enter and exit. Aggresomes overcome this problem by not using a membrane at all. Instead, remarkably, bacteria have adapted the basic physics of phase separation in liquids to help them survive.”

An international team of researchers from multiple disciplines including biophysics, microbiology, genetics, maths and computer science contributed to the research.

The team used fluorescent tags on aggresome protein molecules to track their location in living cells of E. coli bacteria, very similar to those found in our guts. They employed maths modelling and computer simulations to determine how liquid-liquid phase separation results in the observed formation of highly dynamic protein droplets.

Prof Leake added: “The only way we could gain this new understanding is through a large team with expertise that spans multiple disciplines, using advances in experimental biophysics from my team, innovative theoretical approaches from the team of Tom McLeish in York, and state-of-the-art bacterial genetics from Fan Bai’s group in Beijing.

“Research into understanding the workings of these remarkable biological liquid droplets at the scale of single molecules as we have done here may help us to understand why things go wrong in the case of some diseases, not only caused by bacteria but also in conditions of the immune system and in dementia that appear to involve droplet-like molecular assemblies. It may help pave the way to new drugs that either prevent certain droplets from forming or target them for breakdown.”