Interference leads to inaccurate Raman spectroscopic analysis of vitamin B12 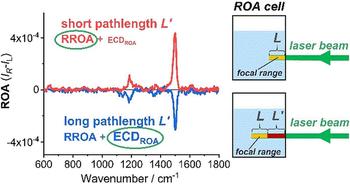 Many natural products are complicated organic molecules. Despite this complexity, scientists are usually able to investigate them using spectroscopic techniques. However, a team of researchers has now discovered that care should be taken using Raman spectroscopy to analyze certain chiral molecules (molecules that have handedness; i.e., they can exist in two “mirror image” forms of each other). The study, published in the journal Angewandte Chemie, shows that interference with circularly polarized light can falsify results.

Vitamin B12 is important for many bodily functions. It contributes to energy metabolism and it has a part to play in the nervous system and blood cells. It can also be variably bonded to other substances, and is non-toxic. These qualities mean that some chemists consider it to have great potential as a transport medium on which certain drugs could “piggyback” to arrive at their target location.

To use vitamin B12 in such complex drug-transport design, however, requires reliable analysis methods. One of the methods used to investigate vitamin B12 is Raman spectroscopy, which is based on measuring light scattered by molecules used to determine vibrational modes. And yet, this method is not perfect. Malgorzata Baranska from the Jagiellonian University in Krakow, Poland, and collaborators have uncovered a potential source of errors in the Raman spectroscopy of vitamin B12.

Since the structure of the selected molecules was similar, the team expected the spectra to be similar too. However, in some of the measurements, optical activity changed significantly as the concentration of the substances in their solutions changed. The researchers warn that if this phenomenon isn't factored into other investigations, it could lead to misinterpretations of data.

As Baranska and her colleagues went on to discover, this unexpected concentration dependency could be attributed to circular dichroism. “The left- and right-circularly polarized light is absorbed differently by a chiral medium, both before and on the focal range of the laser beam in the measurement cell,” Baranska says. The resulting effect may lead to an additional (false) Raman optical activity of the chiral solute. The team believes, “this phenomenon has been either overlooked or misinterpreted in earlier studies.”

Baranska and her colleagues are quick to add that this problem is not insurmountable. The interference can be computationally modeled and then removed from the data, or the measurement itself could be adapted to take account of the interference.

The team also says that, while they demonstrated this phenomenon for vitamin B12 analogues, the procedure is applicable to other light-absorbing chiral molecules too.