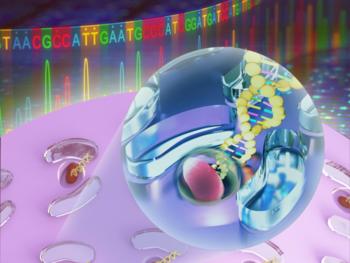 A single cell can reveal much about the biological world through genomic sequencing. Scientists can compare a single, isolated cell to other samples, analyzing the differences and similarities to better understand how the organisms originated and evolved — or even to discover entirely new species.

However, despite the rapid development of single-cell sequencing technologies, sample preparation is still lagging far behind and has increasingly become a major bottleneck preventing the broader application of single-cell technologies.

To solve this issue, researchers from the Qingdao Institute of Bioenergy and Bioprocess Technology (QIBEBT) of the Chinese Academy of Sciences have combined the single-cell sample preparation and sequencing methods into a single, streamlined approach called the Addressable Dynamic Droplet Array (aDDA).

"The single-cell sequencing existing methods are generally unable to track a particular cell from the sample preparation through to sequencing, which clouds the results of how a genome actually matches the specific function of the corresponding cell. The solution lies in combining pieces of two droplet-based platforms," said first author LI Chunyu, a researcher in the Single-Cell Center of QIBEBT.

"An ideal droplet microfluidic platform for sample preparation requires not only static characteristics such as accurate identification and retrieval of individual single-cell-harboring droplets, but also the capability of precisely controlled biochemical reactions on a picoliter scale — one trillionth of a liter, smaller than what the human eye can see," LI said. "In aDDA, all the sample preparation steps, including single-cell isolation, cell lysis, amplification and product retrieval, are performed in sequence within one very small droplet. In this way, every cell can be precisely tracked along the whole single-cell sample preparation and sequencing process."

To validate their approach, the researchers processed the genome of single yeast cells. They found that aDDA reduced some of the issues of the separated approaches and resulted in sequencing 91% of the single cell's genome. Traditional approaches average only recover about 26% of the genome to sequence from a single cell.

"At present, this platform is limited by the throughput since the retrieval step is still manual," said MA Bo, Deputy Director of Single-Cell Center and senor author of this study, noting the team is now working to automate the retrieval process. "Nevertheless, by combining the strength of indexed stationary droplet array and dynamic droplet manipulation, the aDDA should find broad application in exploring phenotype-genotype links at precisely one-cell resolution for the plethora of life forms on Earth."