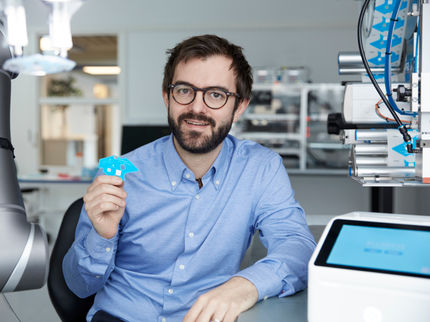 Scaling up from a start-up with scalable tech: A modified Blu-ray optical pick-up, used to detect light scattered by magnetic nanoparticles clustered around target antibodies, can improve the diagnosis of dengue, Zika or SARS-CoV-2 from a single drop of blood

The European Patent Office (EPO) announces that Italian engineer Marco Donolato and team have been nominated as finalists in the "Research" category of the European Inventor Award 2021 for their novel testing device which detects infectious diseases within minutes, enabling medical staff to begin treatment immediately and potentially saving millions of lives in low-income countries struggling with diseases such as dengue fever.

Commercialised through a Copenhagen-based SME that Donolato co-founded in 2014, the device harnesses Immuno-Magnetic Assay (IMA) technology in which a laser beam passes through a blood sample stored in a cartridge and mixed with magnetic nanoparticles. Observing the clustering dynamics of the nanoparticles through an optical reader, similar to that found in a standard Blu-ray player, the device identifies the presence of a biological target like a virus' antigens or antibodies. Using the IMA technology, the company has also recently developed a 5-minute test for detecting COVID-19 antibodies which produces laboratory-grade results in 15 minutes.

"Marco Donolato and his team have shown how different research strands can be combined to provide solutions to some of the biggest global health concerns," says EPO President António Campinos, announcing the European Inventor Award 2021 finalists. "Patenting their technology was a key early step that helped them further develop and commercialised their product. Today, they have an established company that is in an even better position to continue researching, with the potential to have a major impact on the health of some of the world's most vulnerable people."

The winners of the 2021 edition of the EPO's annual innovation prize will be announced at a ceremony starting at 19:00 CEST on 17 June which has this year been reimagined as a digital event for a global audience.

Dengue is a common and potentially fatal mosquito-borne viral disease, and the number of cases has increased 8-fold over the last two decades. With prompt diagnosis and treatment, mortality rates can be reduced from around 20% to less than 1%, However, rapid diagnosis is challenging in many dengue endemic areas as a result of poor infrastructure, the inadequate training of health workers, and symptoms which can be confused with other illnesses. Italian engineer Marco Donolato wants to change this.

Donolato began his career investigating how magnetic fields could be used to manipulate nanoparticles to bind to specific biological targets. Combining his expertise with that of Professor Mikkel Fougt Hansen, a physicist at the Technical University of Denmark (DTU) and Professor Paolo Vavassori of CIC nanoGUNE in Spain, an electronic engineer (both credited as co-inventors), Donolato developed a device that uses magnetic nanoparticles (MNPs) and an optical reader, those found in standard Blu-ray players to rapidly diagnose infectious diseases. The device blends cross-disciplinary research expertise across physics, optical technology and microfluidics to create an approach that harnesses what Donolato calls ‘Immuno-Magnetic Assay (IMA)' technology. "The inventive step was combining what I learned about nanoparticle dynamics in Denmark, with the optics parts I learned and developed in Spain," he says.

The device they developed has two components: single-use ‘ViroTrack' cartridges, which contain the reagents and microfluidic channels necessary for automating the different steps of the assay; and a small, optical reader called a BluBox, which processes the cartridges. After a drop of the patient's blood is loaded onto the cartridge and inserted into the BluBox, plasma gets separated from the red blood cells through a micro-centrifugation step. Also housed in the cartridge are MNPs coated with antibodies which are specific to the relevant target, for example, dengue NS1 antigen - a protein which is secreted into the blood during infection with dengue virus. As the plasma mixes with the MNPs, any target present in the sample binds to them. This causes the particles to clump together, encouraged by the application of a linear magnetic field, which brings the MNPs into contact with one another and aligns them in chains. If target is present, the MNPs remain stuck together when the magnetic field is switched off. A blue laser beam is then shone through the sample while an oscillating magnetic field is applied, causing the chains of MNPs to rotate and scatter the light. This light signal is detected by the optical read-out unit and will be different, depending on whether any target is present, and how much of it there is.

Scaling up from a start-up with scalable tech

The simplicity of the solution and the potential of its application in low-income countries where low-cost testing is required inspired Donolato to commercialise the device through the company he co-founded in 2014, BluSense Diagnostics. The company is based in Copenhagen, Denmark, the source of its initial funding, and home to the Medicon Valley life sciences cluster. To support its work, a second company, BluSense Biotech was established in Taiwan in 2015, to develop the hardware and software for the BluBox device.

Donolato says their patent played a crucial role in raising investor capital and obtaining public funding to refine their technology. "Without the invention we would not have the foundation to start the company, however we live on the trust of our investors and a lot of other people who believe in us and our mission. When you're asked to believe in a potentially bright idea of a bunch of young researchers, a patent is something that gives the company a tangible value. It was a key cornerstone for us, both to raise investor capital and to get a public grant to develop the technology."

To date, the invention has been used to detect the dengue NS1 antigen, which can help diagnose early dengue infection with cartridges already approved for sale in Vietnam, Thailand and Malaysia.

BluSense Diagnostics has also developed a diagnostic test for Zika antibodies which indicate a current or recent infection. An additional test for dengue antigens or antibodies in a drop of blood is close to commercial launch, as are tests for chikungunya, yellow fever and Chagas disease. The company expanded its portfolio in response to the COVID-19 pandemic by creating a serology test cartridge with over 90% accuracy, before focusing on a new product capable of quantifying a patient's antibody response to a SARS-CoV-2 infection or vaccination in just 6 minutes, which is being launched in May 2021.

Inexpensive, rapid and precise, Donolato's invention can be scaled to almost any infectious disease and has the potential to transform the way some of the world's most prevalent diseases are detected and treated.