Clocking electron movements inside an atom 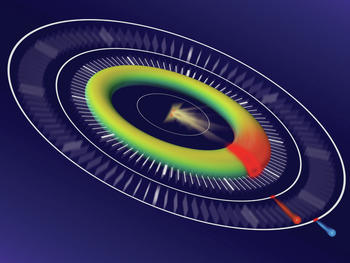 Artistic depiction of the experiment. The inherent delay between the emission of the two types of electron leads to a characteristic ellipse in the analysed data. In principle, the position of individual data points around the ellipse can be read like the hands of a clock to reveal the precise timing of the dynamical processes.

Hard X-ray free-electron lasers (XFELs) have delivered intense, ultrashort X-ray pulses for over a decade. One of the most promising applications of XFELs is in biology, where researchers can capture images down to the atomic scale even before the radiation damage destroys the sample. In physics and chemistry, these X-rays can also shed light on the fastest processes occurring in nature with a shutter speed lasting only one femtosecond – equivalent to a millionth of a billionth of a second.

However, on these miniscule timescales, it is extremely difficult to synchronize the X-ray pulse that sparks a reaction in the sample on the one hand and the laser pulse which ‘observes' it on the other. This problem is called timing jitter, and it is a major hurdle in ongoing efforts to perform time-resolved experiments at XFELs with ever-shorter resolution.

Now, a large international research team involving collaborators from the MPSD and DESY in Hamburg, the Paul Scherrer Institute in Switzerland, and other institutions in seven countries has developed a method to get around this problem at XFELs and demonstrated its efficacy by measuring a fundamental decay process in neon gas.

Many biological systems – and some non-biological ones – suffer damage when they are excited by an X-ray pulse from an XFEL. One of the causes of damage is the process known as Auger decay. The X-ray pulse ejects photoelectrons from the sample, leading to their replacement by electrons in outer shells. As these outer electrons relax, they release energy which can later induce the emission of another electron, known as an Auger electron. Radiation damage is caused by both the intense X-rays and the continued emission of Auger electrons, which can rapidly degrade the sample. Timing this decay would help to evade radiation damage in experiments studying different molecules. In addition, Auger decay is a key parameter in studies of exotic, highly excited states of matter, which can only be investigated at XFELs.

Ordinarily, timing jitter would appear to preclude time-resolved studies of such a short process at an XFEL. To circumvent the jitter problem, the research team came up with a pioneering, highly precise approach and used it to chart Auger decay. The technique, dubbed self-referenced attosecond streaking, is based on mapping the electrons in thousands of images and deducing when they were emitted based on global trends in the data. “It is fascinating to see how our enhancement of a technique which was originally developed for the characterization of X-ray pulses at Free-Electron Lasers finds new applications in ultrafast scientific experiments,” says co-author Christopher Behrens, a researcher in the FLASH photon research group at DESY.

For the first application of their method, the team used neon gas, where the decay timings have been inferred in the past. After exposing both photoelectrons and Auger electrons to an external ‘streaking’ laser pulse, the researchers determined their final kinetic energy in each of tens of thousands of individual measurements. Crucially, in each measurement, the Auger electrons always interact with the streaking laser pulse slightly later than the photoelectrons displaced initially, because they are emitted later. This constant factor forms the foundation of the technique. By combining so many individual observations, the team was able to construct a detailed map of the physical process, and thereby determine the characteristic time delay between the photo- and Auger emission.

Lead author Dan Haynes, a doctoral student at the MPSD, says: “Self-referenced streaking enabled us to measure the delay between X-ray ionisation and Auger emission in neon gas with sub-femtosecond precision, even though the timing jitter during the experiment was in the hundred-femtosecond range. It’s like trying to photograph the end of a race when the camera shutter might activate at any moment in the final ten seconds.”

In addition, the measurements revealed that the photoionization and the subsequent relaxation and Auger decay must be treated as a single unified process rather than a two-step process in the theoretical description of Auger decay. In previous time-resolved studies, the decay had been modelled in a semiclassical manner.

However, under the conditions present in these measurements at LCLS, and at XFELs generally, this model was found to be inadequate. Instead, Andrey Kazansky and Nikolay Kabachnik, the collaborating theorists on the project, applied a fully quantum-mechanical model to determine the fundamental Auger decay lifetime from the experimentally observed delay between ionisation and Auger emission.

The researchers are hopeful that self-referenced streaking will have a broader impact in the field of ultrafast science. Essentially, the technique enables traditional attosecond streaking spectroscopy, previously restricted to tabletop sources, to be extended to XFELs worldwide as they approach the attosecond frontier. In this way, self-referenced streaking may facilitate a new class of experiments benefitting from the flexibility and extreme intensity of XFELs without compromising on time resolution.