A clear path to better insights into biomolecules 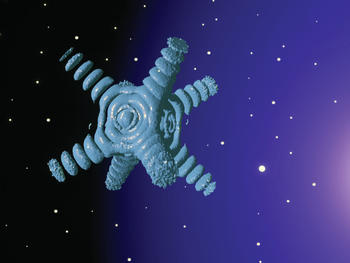 Illustration of the 3D diffraction pattern of octahedral nanoparticles, obtained by combining many snapshots after structural selection

An international team of scientists, led by Kartik Ayyer from the MPSD, has obtained some of the sharpest possible 3D images of gold nanoparticles. The resuts lay the foundation for obtaining high resolution images of macromolecules. The study was carried out at the European XFEL’s Single Particles, Clusters, and Biomolecules & Serial Femtosecond Crystallography (SPB/SFX) instrument and the results have been published in Optica.

Carbohydrates, lipids, proteins, and nucleic acids are micromolecules which populate our cells and are vital for life. The key to understanding how these macromolecules work lies in understaning their structure. Using gold nanoparticles as a substitute for biomolecules, the team measured 10 million diffraction patterns and used them to generate 3D images with record-breaking resolution. Gold particles scatter far more X-rays than bio-samples and thus make good test specimens. They provide lot more data which make them highly useful for fine-tuning methods that can then be used on biomolecules.

“The techniques used to obtain high-resolution images of biomolecules include X-ray crystallography, which requires the biomolecules to be crystallized," says Kartik Ayyer, the leader of the Computational Nanoscale Imaging group at the MPSD. "This is not an easy process. Alternatively, cryo-electron microscopy works with frozen molecules,” he adds. However, the advent of X-ray free electron lasers opened the doors to single particle imaging (SPI), a technique that has the potential to deliver high resolution images of biomolecules at room temperature and without crystallization. Hence the biomolecules can be studied closer to their native state. This in turn yields better insights into their structure and function in our bodies.

But two hurdles remained in SPI: Collecting enough high-quality diffraction patterns and properly classifying the structural variability of the biomolecules. The team's work shows that both these barriers can be overcome, says Kartik Ayyer: “Previous SPI experiments only produced around tens of thousands of diffraction patterns, even in best-case scenarios. However, to get resolutions relevant for structural biology, researchers need 10 to 100 times more diffraction patterns.” explains Ayyer. "Thanks to the unique capabilities of the European XFEL facility, namely, the high number of X-ray laser pulses per second and high pulse energy, the team were able to collect 10 million diffraction patterns in a single 5-day experiment. This amount of data is unprecedented and we believe our experiment will serve as a template for the future of this research field,” he says.

To overcome the problem of structural variability of biomolecules, that is, dealing with a snapshot from each particle that is slightly different from each other, the researchers developed a special algorithm. The diffraction patterns are collected by a two-dimensional detector—much like a fast X-ray camera. An algorithm then sorts the data and allows the researchers to reconstruct the image of the biomolecule. “We used the capabilities of the Adaptive Gain Integrating Pixel Detector (AGIPD), which allowed us to capture patterns at that high rate. We then collected and analysed the data with customized algorithms to obtain images with record-breaking resolutions,” says Ayyer.

“This study truly exploited the unique property of the high repletion rate of our facility, the fast-framing detector and effective sample delivery,” says Adrian Mancuso, leading scientist of the SPB/SFX group. “It shows that in future, the European XFEL is well placed to explore the limits of ‘vision’ for uncrystallised, room-temperature biomolecules.”