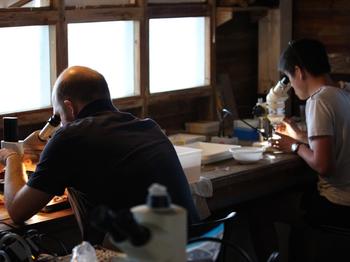 The two lead authors share a passion for bioinformatics and symbiotic critters in marine sands. Here, they are searching for small worms under the microscope at Carrie Bow Cay Field Station in Belize.

First the background: Microbiologists traditionally determine which organisms they are dealing with using the small subunit ribosomal RNA or in short SSU rRNA gene. This marker gene allows to identify almost any living creature, be it a bacterium or an animal, and thus assign it to its place in the tree of life. Once the position in the tree of life is known, specific DNA probes can be designed to make the organisms visible in an approach called FISH (fluorescence in situ hybridization). FISH has many applications, for example to sort cells, or to microscopically record their morphology or spatial position. This approach – which leads from DNA to gene to tree and probe to image – is called the “full-cycle rRNA approach”. To make the SSU rRNA measurable, it is usually amplified with polymerase chain reaction (PCR). Today, however, PCR is increasingly being replaced by so-called metagenomics, which record the entirety of all genes in a habitat. Rapid methodological advances now allow the fast and efficient production of large amounts of such metagenomic data. The analysis is performed using significantly shorter DNA sequence segments – much shorter than the SSU gene – which are then laboriously assembled and placed into so-called metagenomically assembled genomes (MAGs). The short gene snippets do not provide complete SSU rRNA, and even in many assemblies and MAGs we do not find this important marker gene. This makes it hard to molecularly identify organisms in metagenomes, to compare them to existing databases or even to visualize them specifically with FISH.

Researchers at the Max Planck Institute for Marine Microbiology in Bremen now present a method that closes this gap and makes it possible to reconstruct and analyze SSU rRNA from raw metagenome data. “This software called phyloFlash, which is freely available through GitHub, combines the full-cycle rRNA approach for identification and visualization of non-cultivated microorganisms with metagenomic analysis; both techniques are well established at the Max Planck Institute for Marine Microbiology in Bremen,” explains Harald Gruber-Vodicka, who chiefly developed the method. “phyloFlash comprises all necessary steps, from the preparation of the necessary genome database (in this case SILVA), data extraction and taxonomic classification, through assembly, to the linking of SSU rRNA sequences and MAGs”. In addition, the software is very user-friendly and both installation and application are largely automated.

Gruber-Vodicka and his colleague Brandon Seah – who are shared first authors of the publication now presenting phyloFlash in the journal mSystems – come from symbiosis research. The communities they are dealing with in this field of research are comparatively simple: Usually a host organism lives together with one or a handful of microbial symbionts. Such communities are particularly well suited for analysis with phyloFlash. “For example, we do a lot of research on the deep-sea mussel Bathymodiolus, which is home to several bacterial subtenants,” says Gruber-Vodicka. “With the help of this well-studied community, we were able to test whether and how reliably phyloFlash works”. And indeed, the new software reliably identified both the mussel and its various symbionts. Niko Leisch, also a symbiosis researcher at the Max Planck Institute for Marine Microbiology, tested phyloFlash on small marine roundworms. Analyses of various such nematodes showed that some of the species of these inconspicuous worms might be associated with symbionts. “These exciting glimpses underline the great potential of our simple and fast method”, Gruber-Vodicka points out.

phyloFlash is an OpenSource software. Extensive documentation and a very active community ensure its continuous testing and further development. “phyloFlash is certainly not only interesting for microbiologists,” emphasizes Gruber-Vodicka. “Already now, numerous scientists from diverse fields of research make use of our software. The simple installation was certainly helpful in this respect, as it lowers the threshold for use”. This easy access and interactive character is also particularly important to Brandon Seah, who now works at the Max Planck Institute for Developmental Biology: “The most satisfying thing for me about this project is to see other people using our software to drive their own research forward,” says Seah. " From the beginning, we've added features and developed the software in response to user feedback. These users are not just colleagues down the hall, but also people from the other side of the world who have given it a try and gotten in touch with us online. It underlines how open-source is more productive and beneficial both for software development and for science.”